The anti-government protests in Colombia in recent weeks have been repressed with enormous violence by the local police forces, resulting in a total of 59 deaths and more than 2,300 injuries. The first demonstrations were organized at the end of April to challenge a tax reform proposal, which was later abandoned. As the days went by, however, the protests had become much more widespread and turned against the huge inequalities in the country and poverty, both problems that protesters said had been exacerbated by the government’s mishandling of the coronavirus pandemic.

The demands of the demonstrators are varied: it calls for the introduction of a universal income to smooth out inequalities, the significant decrease in university fees in order to encourage more young people to continue their studies, and the dismantling of the riot police, which in recent years has she was accused of carrying out numerous violence, killings and rape during anti-government demonstrations.

The greatest violence occurred in Colombia’s largest cities, such as Cali, Medellín and the capital Bogota, where protesters ransacked shops and banks, and set fire to buses and police stations, while law enforcement officers responded with tear gas. and batons. Protesters also set up barricades both along some highways in the country and in some neighborhoods of major cities, causing enormous problems for the supply of food, medicines and fuel, and for public transport.

The situation continues to be quite critical particularly in Cali, where according to correspondents of BBC poverty would have increased three times more than in the rest of the country due to the pandemic, which has pushed more than 3.5 million Colombians into poverty. In recent days in Cali at least 14 people have been killed and a hundred injured: the UN has invited Colombia to open an independent investigation to ascertain the causes of the deaths during the protests, for which it was also called to intervene. the army on the orders of the Colombian president Iván Duque.

In recent weeks, several protesters said they were beaten in the head and threatened by law enforcement, while others said that some officers had fired gunshots at their feet from close range. At the same time, several circulated on social networks

An analysis of videos, combined with witness interviews, shows egregious and indiscriminate use of force by Colombia's national police. At least 44 have been killed during protests over economic disparity that started over a month ago. https://t.co/Lc7kXYYoPE pic.twitter.com/OtUokF3fvW

in which particularly violent or controversial actions by the police are seen, for example officers who try to ram the crowd with motorcycles or others who shoot tear gas at doctors committed to rescuing injured demonstrators.

Sexual violence, and the threat of sexual violence, were tools used by the police against women and girls who participated in the demonstrations, she told Vice Emilia Márquez, co-director of the NGO Temblores, which deals with reporting abuses by the security forces. Márquez called rape “a weapon of war, as well as a torture weapon to punish protesters,” and said that by mid-May Temblores had received 18 reports of alleged rape and 87 of gender-based violence by women who had participated in the protests.

On May 12, 17-year-old Alison Ugus was arrested while filming officers throwing tear gas during a protest in her hometown of Popoyán. After being released, Ugus wrote on Facebook that she was raped by four officers while in police custody: two days later she was found dead, allegedly by suicide.

In particular, the riot squad Escuadrón Móvil Antidisturbios (ESMAD), who are equipped with non-lethal weapons, such as tear gas canisters and shotguns with rubber bullets, were involved in the clashes. Already last year, the Human Rights Watch NGO accused ESMAD agents of carrying out dozens of acts of violence during the anti-government protests of 2019 and 2020.

– Read also: Protests against tax reform in Colombia have become something more

Previous protests, last September, began after a video was released in which a man, before dying, was repeatedly hit by two officers with a taser, a non-lethal weapon that strikes with electric shocks. In November 2019, however, tens of thousands of people had protested against the death of Dilan Cruz, a teenager shot by the police during one of the first demonstrations against Duque.

On Sunday, along with the protests, thousands of people demonstrated peacefully in Bogota dressed in white T-shirts or clothing to demand an end to the violence and to remove the barricades set up by the protesters, which they believe are contributing to an already very bad economic situation. criticism. Meanwhile Duque, whose popularity has dwindled considerably, has refused to make concessions until the protesters remove the barricades; on May 28, however, he announced that he would mobilize 7,000 soldiers to clear those located on the main highways. 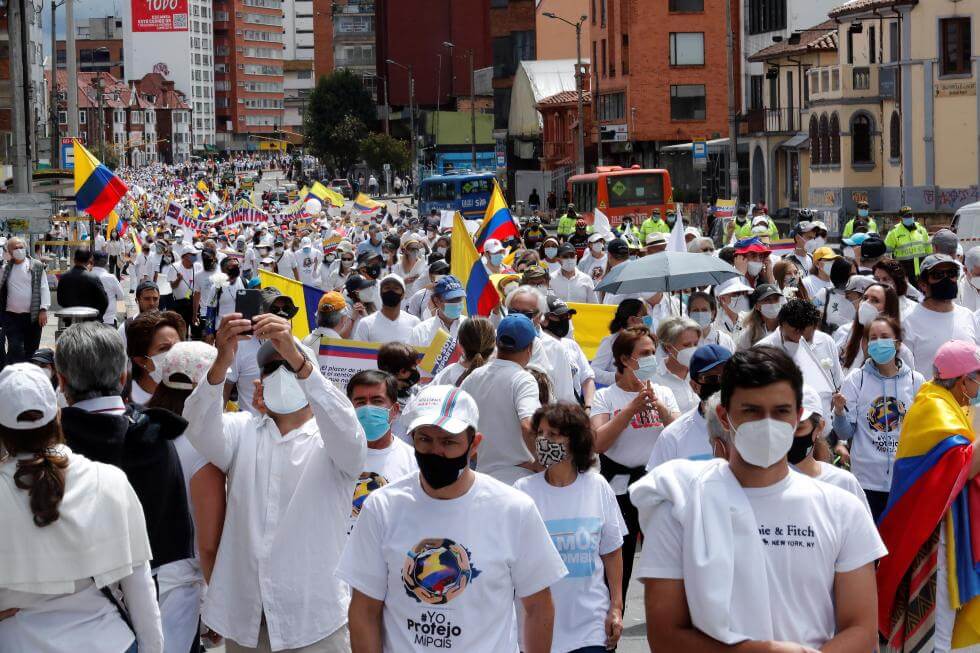 Demonstration against the national strike and police violence in Bogotà, May 30 (EPA / Mauricio Duenas Castaneda via ANSA)

So far the Colombian authorities have opened 157 investigations for the alleged misconduct of their agents and 11 for murder; however, they also tried to contain the criticisms and complaints directed at the police, often labeling them as “fake news” and underlining that in the clashes of the last few weeks two policemen have also died and 35 others have been injured.

Elisabetta and Luca “The unexpected happened”

Procession of motorcyclists for Bolsonaro in San Paolo