On the evening of July 15, 2016, part of the army in Turkey attempted to carry out a coup against President Recep Tayyip Erdoğan. He blocked the country’s two main cities, Istanbul and the capital Ankara, bombed the parliament, took the head of the armed forces hostage and tried to capture Erdoğan too, who narrowly escaped.

The operation turned out to be worse organized than expected. The coup leaders were a minority in the army and poorly coordinated, and within a few hours the forces loyal to Erdoğan managed to regain control of the situation: the attempt to overthrow the government began on the evening of July 15 and ended the next day at the earliest morning hours. Despite this, more than 250 people were killed – mostly citizens who took to the streets in support of Erdoğan overnight – and over 2,000 were injured.

Above all, after the coup, Turkey has changed profoundly.

Erdoğan, who was also the victim of the coup, took advantage of it to get rid of his internal enemies: he accused Fethullah Gülen, a former ally of his who had become a political opponent, and his organization of having set up the operation, and began a campaign elimination of insider threats that led to the arrest of hundreds of thousands of people and the firing of hundreds of thousands more from public office in the military, education and justice system – many of these had little or nothing to do with the coup. The arrests and sentences have never really stopped, and as of April of this year dozens of people were sentenced to life in prison.

Turkish politics has changed: Erdoğan has strengthened and has begun to take increasingly authoritarian measures, which have led, among other things, to the arrest of well-known members of the opposition. The country’s economy and foreign policy have also changed, moving further and further away from NATO, of which Turkey is a member, and closer to countries like Russia and China.

– Read also: Is Erdoğan a dictator?

Blow
The coup began on the evening of July 15 with an operation by a group of soldiers coordinated by senior officers in the army, navy and air force. The coup leaders almost simultaneously blocked some strategic communication routes in Ankara and Istanbul (where two bridges over the Bosphorus river were closed), took control of some military bases and airports and arrested the high commands of the armed forces loyal to the government. Most of the putschists were part of the aviation, and war jets and helicopters were the primary means of military operations.

The coup leaders also took control of the headquarters of some television stations, and sent a message announcing that the “Council for peace in the homeland” had seized power and imposed martial law. The Council, the statement said, would restore order in the country and approve a new Constitution as soon as possible.

In the first moments of the coup, Erdoğan’s conditions were unknown. The president was on vacation in Marmaris, a seaside resort in southwestern Turkey, and on the evening of the 15th, many feared that he had been arrested by the coup leaders, or even killed.

In the first few hours it seemed that the coup was having a success, but things turned upside down in a short time. The coup leaders had tried to arrest Erdoğan at his villa in Marmaris, but he had managed to escape before their arrival and boarded the presidential plane to return to Istanbul. Shortly after 9 pm he connected live with a journalist from CNN Turkey via a video call on FaceTime: those images remained as one of the most incredible moments of the attempted coup.

In video call with CNN, Erdoğan reassured the Turks that he was alive, said he was on his way to Istanbul and asked all citizens to take to the streets to counter the coup leaders and defend democracy. At that point the coup had failed, although the fighting continued for a few more hours. Thousands of people took to the streets and directly confronted the forces of the coup leaders, who fired into the crowd using even fighter jets.

Around 11.30 pm the coup leaders arrived to bomb the parliament building in Ankara, but in the following hours the part of the army loyal to Erdoğan recaptured all the positions held by the coup leaders. In the cities, in some cases the citizens also contributed: in a bridge over the Bosphorus, in Istanbul, the military coup were beaten up by angry Turks.

Shortly after midnight Erdoğan landed in Istanbul, and around one o’clock he appeared before a group of people who had gathered to cheer him. He urged the Turks to remain on the streets to garrison until the situation stabilized, and said that after this coup attempt he would “clean up” the ranks of the army.

Meanwhile, the last positions of the coup leaders were recaptured by the armed forces loyal to Erdoğan. At about 5 am on July 16, the army headquarters was recaptured and the head of the armed forces, Hulusi Akan, was released. By 9 o’clock it was all over.

Failure
For those who know a bit of Turkish history of the last century, the peculiar aspect is not that on July 15, 2016 there was a military coup in Turkey, but that the coup failed.

In fact, since the beginning of the twentieth century, the Turkish army has always been the dominant institution in the country, whose task was to preserve the rigidly secular order imposed by the founder of the Turkish republic, Kemal Atatürk. In the second half of the twentieth century, the military coups d’etat against civil governments that tried to deviate even slightly from the Kemalist orthodoxy were numerous. Between 1960 and 1997 the army caused the fall of four elected governments, in some cases without even the need to use troops: it was enough to threaten a coup d’état to cause mass resignation of the entire executive.

The main reason for the failure of the 2016 coup is that it was exceptionally poorly organized. Although the operation enjoyed the support of several high ranks of the military, the coup military was relatively few, and the bulk of the troops participating in the operation were recruits who had no real idea what was going on. later in the trials, they were told that they were carrying out counter-terrorism activities. The operation was then definitively doomed to failure when the coup leaders failed to capture Erdoğan.

The unprecedented division within the armed forces between the supporters of the coup and the supporters of Erdoğan also contributed to the failure: it was the first time that the army did not act in public in a united way, and this for many was a sign of the fact. that, weakened in previous years of Erdoğan’s rule, the army was no longer the formidable and formidable force it once was.

Repression
Erdoğan began to say that the coup was the work of a “parallel structure” and to promise that the organizations behind the operation would be dismantled since his video call with the CNN Turkey on the night of July 15th. The government purges began almost immediately: in the late morning of July 16, when the fighting had just ended, the government announced the removal from their posts of 2,745 judges, the first of hundreds of thousands of civil servants who would by then. lost his job because he was suspected of having even tenuous ties with the coup leaders.

In a short time, Erdoğan dumped all the blame for the operation against him on the organization of Fethullah Gülen, a former ally of his who had taken refuge in the United States a few years earlier, and who actually led an organization of a political-religious nature very well rooted within the public administration, the judiciary and the military. Gülen and his organization had contributed to Erdoğan’s rise to power, but after a few years the two had become political opponents, and for some years in Turkey an underground war was underway between faithful to Erdoğan and Gulenists for control of the apparatuses of the state.

Experts today believe that Gülen’s organization played a role in the coup, although it is not possible to define the level of involvement. However, the government renamed the organization as FETÖ (Terrorist Organization of Fethullah) and began to persecute it at all levels.

23,364 members of the armed forces were removed from their posts, as well as nearly 4,000 judges and prosecutors. More than 100,000 public administration officials have been fired or suspended on suspicion of being Gulenists.

Consequences
July 15 in Turkey is now a national day of commemoration: every year in the country big events, concerts and sporting events are held to remember the many civilian victims of the coup and celebrate the heroism of the nation. Among other things, a film has also been released this year – “15/7: The First Lights of Dawn” – which reconstructs the night of the coup in very charged and dramatic tones.

According to many experts such as Gareth Jenkins, an analyst who was interviewed by France 24, Erdoğan not only took advantage of the coup to initiate a great repression, but he also made it the founding myth of the “New Turkey”, a propaganda concept often cited by the president and by people close to him to indicate in Erdoğan a new father of the country, after Atatürk.

The coup gave Erdoğan the justification to make his methods of government increasingly authoritarian and to persecute even that part of the opposition that had nothing to do with the coup, such as parties and formations. Kurdish. Erdoğan’s influence began to extend to the economy as well, with rather poor results. 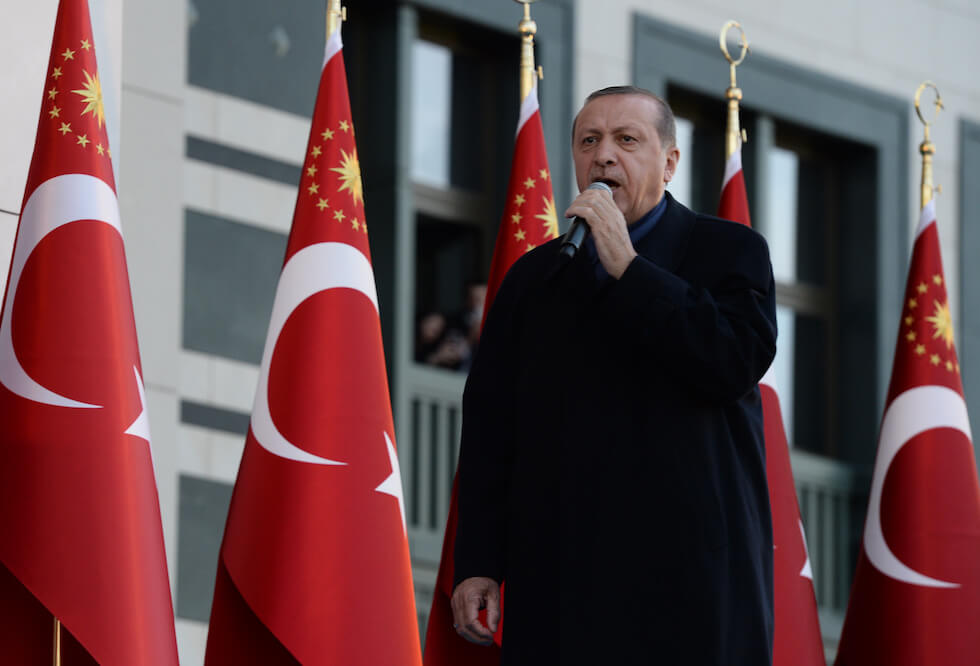 It also changed Turkey’s foreign policy. Erdoğan accused the Western allies of not having supported him on the night of the coup: in reality it was not true and the messages of support for the democratically elected government arrived almost immediately from both the United States and the European Union, even if, actually , in the following weeks the allies refused to fully accept Erdoğan’s warlike rhetoric and to support his massive repression operation.

In any case, Erdoğan took advantage of the moment to realign Turkey’s international position: a little further away from NATO (of which he remains a member anyway) and a little closer to China and Russia. Especially with the latter, in recent years Turkey has entered into a relationship of intense competition and collaboration in various fields, with the aim of dividing the areas of influence in the region.

Internally, although the crackdown on alleged members of Gülen’s organization has been going on for five years now, Erdoğan argues that there is still work to be done: “We will continue to chase [l’organizzazione di Gülen] until its last member has been neutralized, ”he said this week.

PREV Sofia of Spain is taller than her sister Leonor and her mother Letizia Ortiz
NEXT Felipe of Spain and Letizia Ortiz on vacation with their daughters: the second … – Today

Sicily weather, even August will be hot: this is what the climate maps say

how much they will cost from 6 August – Il Tempo