The appearance is that of a classic vending machine, and in fact the operation of the machine designed by Mr. Go does not differ much from the model it is inspired by. However, the entire cycle of preparation of a round pizza to take away takes place inside the machine in three minutes.

Mr.Go. An “automatic pizzeria in Rome

Ready in just 3 minutes, 24 hours a day, 7 days a week. For a few days now, at number 2 in via Catania, Rome (Piazza Bologna area), what looks like a classic snack vending machine has attracted the attention of passers-by. in her bright red dress. But the sign leaves no room for doubt: in the space of a few square meters, from one day to the next, the first automatic pizzeria in the city was born. Mr.Go is the brand that identifies a decidedly provocative project: the first machine installed in the capital – pilot of a chain that wants to colonize the main Italian cities with food distributors “at the service of the consumer”, not necessarily focused on the same product – is able to knead, season and cook a pizza in 3 minutes, “And to return it to the customer ready to be tasted”. To overcome the understandable distrust of the patrons – in a city traditionally linked to the culture of pizza by the slice, which does not lack quality addresses for lovers of the genre – Mr. Go guarantees the use of fresh ingredients of first choice, and invites the customer to observe with their own eyes how the process works, from the preparation of the dough to the baking.

The preparation of the pizza

Inside the fully automatic machine, the flour is mixed with water to obtain a 160 gram stick; then the dough is pressed until it becomes a disk, on which to spread the tomato. Followed by the toppings related to the selected pizza, vacuum-packed until the moment of preparation. Finally, the pizza goes into the “oven”, where it cooks at 380 degrees; the delivery takes place in the carton, just like when you pick up a takeaway pizza. The technology Mr. Go relies on is actually the result of the research of an international start-up that operates in the food tech sector and has patented the distributor under the Let’s Pizza brand; The Food Labs of Bolzano participates in the project, which has been working to implement the efficiency and quality of the machinery for ten years now. 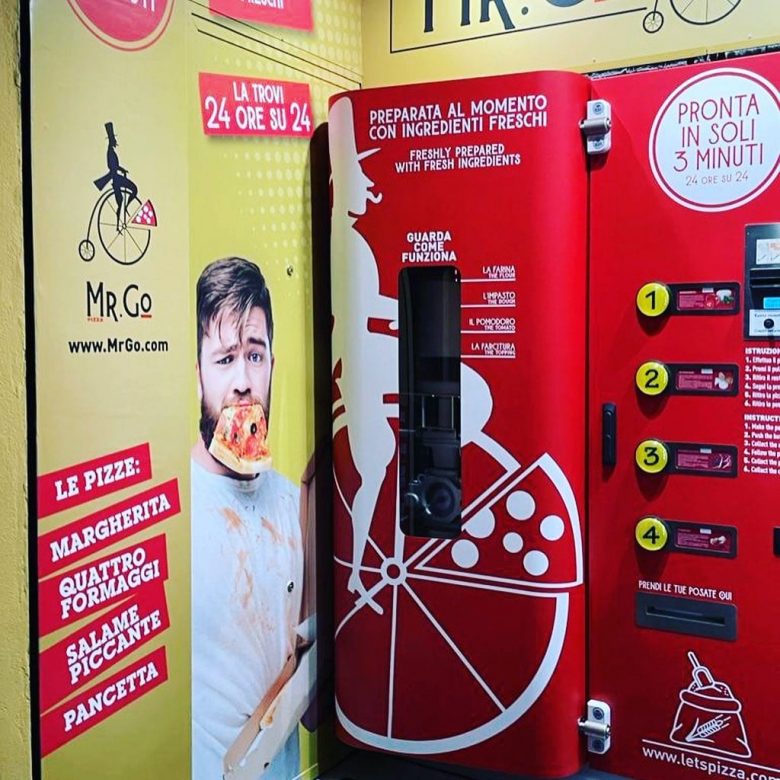 There are four alternatives proposed by Mr. Go to those who want to try their hand at “the company”: margherita, diavola, pancetta and margherita four cheeses, with prices ranging from 4.50 (for the margherita) to 6 euros (for the four cheeses) , and a final result more similar in appearance to a seasoned piadina (the leavening process can only be a mirage, and the creators of the project respond to the doubts expressed on the Mr. Go Facebook page: “The flour mix used contains a very small amount of leavening agent and sugar that activate the leavening process during the cooking phase “) than a real Roman-style pizza. Certainly the automatic pizzeria will be talked about, polarizing the discussion between detractors – the largest group – and supporters of the idea, who already highlight the convenience of a service available at any time of day and night, even after hours. closing of the pizzerias, moreover in an area of ​​the city frequented by many university students, who may prove less wary of trying the experience. Quality pizza, however, is something else.

The Fb page of Mr. Go

PREV “Low blow, you shouldn’t have done it” – Time
NEXT Tennis, Open Italy Djokovic Sonego 1-0, the second is played – Tennis

Gaza: new toll, 139 dead including 39 children. The skyscraper that houses the AP and Al-Jazeera – Middle East has been hit

the do-it-yourself recipe to wash your hair without shampoo