The fourth wave is much more lethal in countries that have a lower vaccination rate. The numbers say it. In the last week in Romania there were on average over 19 deaths per day per million inhabitants, in Bulgaria there were 14.8, in Ukraine and Serbia 8.1 and 7.9 respectively (source: ‘Our World in Data’ ). But the virus also hurts in Russia (6.7 deaths per day per million inhabitants) and in Croatia (4.3). In all these countries the percentage of vaccinated is very low: it ranges from 15.5% in Ukraine to 43% in Croatia. In Bulgaria only one in five inhabitants is immunized, in Romania and Russia the percentage is between 30 and 33%.

Covid does much less harm in nations that have registered a high adhesion to the vaccination campaign: in Portugal and Italy the average is 0.6 deaths per day per million inhabitants, in France 0.5 and in Germany 0.8.

Even in the United Kingdom, which is also dealing with a surge in cases, mortality remains contained all in all. And all this despite the distance and the masks have been a distant memory for months.

On the other hand, in countries that have not vaccinated much, the situation is becoming serious. The fourth wave is particularly affecting Eastern Europe where several countries have already reintroduced measures to stem the infections or are in the process of doing so.

Anti-contagion restrictions are back in Russia

In Russia, Covid-19 cases have risen to over 34,000 per day and daily deaths have exceeded 1,000, a record high, according to the government’s coronavirus task force (but on the numbers communicated by Russian authorities in the past, more than a suspect).

The infections have been on the rise for weeks. And the curve shows no sign of going down. The worsening of the epidemiological situation convinced Putin to intervene. The head of the Kremlin yesterday ordered non-essential workers not to go to work for at least a week, starting from 30 October and until 7 November. Regional governments where infection rates are particularly high will be able to accelerate or extend measures, with employers continuing to pay staff even when they stay at home. 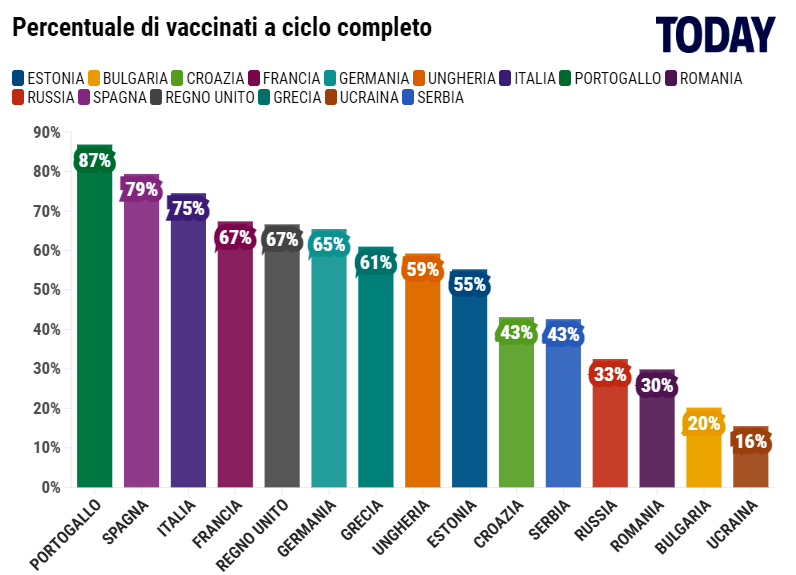 “We know that this problem, unfortunately, is growing and it is impossible not to pay attention to it”, said the Russian president, stressing that “our main task is to protect the lives and health of citizens as much as possible, to minimize the negative consequences of a dangerous contagion. And for this reason it is now, first of all, important to slow down the pace of its spread “.

The mini lockdown in Latvia

Even in Latvia, which has 55% vaccinated against an EU average of 74%, things are starting to go wrong. In the last week, the number of deaths per million inhabitants was about 13 times that recorded in Italy.

The surge in infections in recent days has convinced Prime Minister Krisjanis Karins to return to lockdown: curfew after 8 pm and shops, restaurants and schools, as well as cinemas and gyms, which will again have to close their doors from 21 October until November 15. “I apologize to all those who have already been vaccinated,” the prime minister said. “Our health system is in danger and the only way out of this crisis is to get vaccinated.”

In Romania the no-vax “win” and the virus spreads

To say the least, the situation in Romania is disastrous where there is one death every five minutes and thousands of people have decided to take care of themselves at home using oxygen cans used for mountain climbing, or relying on off-label medicines, that is not approved by the scientific community as an anti-Covid cure.

A real disinformation campaign on the risks associated with vaccination was carried out in the country. No-vax doctors and politicians have found ample coverage in the media (including public television) and even the Orthodox Church has questioned the need for immunization. The result is that more than two out of three inhabitants have decided to do without the vaccine. The Delta variant has thus inundated hospitals with Covid patients and it also happens that the sick are treated on chairs because there are no more seats in the beds in the wards. 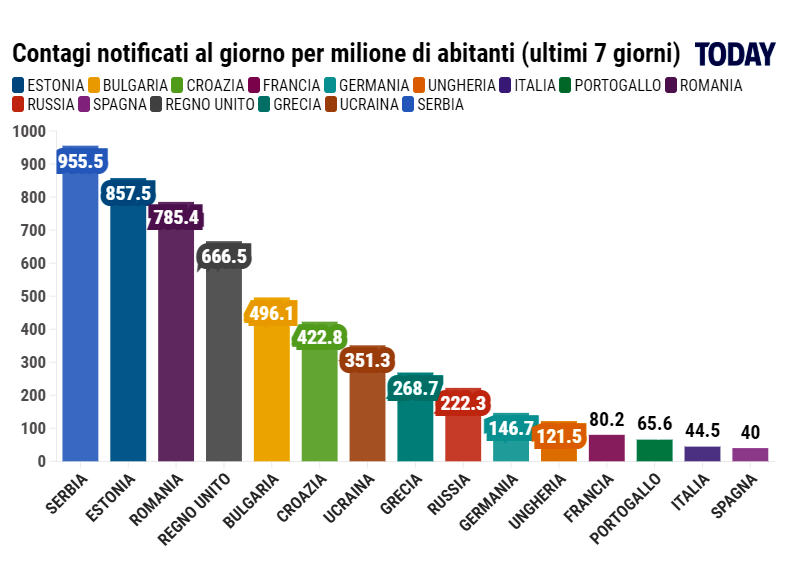 Bulgaria is also facing a surge in Covid-19 infections. The latest bulletin reports 4,522 infections in 24 hours, the second highest figure since the beginning of the pandemic and 107 deaths, a very high number for a country of about 7 million people. And so here too we run for cover.

Starting today, the country is obliged to show the green pass to access cinemas, restaurants, theaters, gyms, hotels and shopping centers, as well as to attend university or access hospitals and retirement homes. The measure has provoked numerous protests in a country that has the lowest vaccination rate in the European Union.

Lithuania is also dealing with a worrying increase in deaths, despite the vaccination rate being around 60%, lower than the EU average, but still higher than other Eastern countries. It is no better in Ukraine which in the last 24 hours has recorded 22,415 new cases of Coronavirus infection with 546 new deaths, in a country that has 42.3 million inhabitants. The percentage of full-cycle vaccinated is just 15.5% of the population.

The general trend in deaths and the case of the UK

Although the increase in infections – and therefore also in deaths – is also related to other factors (social distancing, use of masks, obligation to green pass) from the data of the countries examined a fairly clear trend emerges: where the vaccination rate it is higher you die a lot less.

A partial exception, at least in Western Europe, is the United Kingdom where the government of Boris Johnson has reserved the right to consider the restoration of “further measures” of precaution. Despite the fact that infections have been very high for some time, the number of deaths per million is still low compared to other eastern states (but more than three times that of Italy). However, the fear is that the national health service could come back under great pressure in the winter.

However, we are talking about a country that since 19 July, the day of “Freedom Day”, has removed all types of restrictions (including the obligation to wear masks indoors) and abandoned any ambition to contain the virus. However, it is not said that Boris Johnson’s executive is not forced to retrace his steps.

NEXT Covid Marche today: the bulletin with the infections of October 31, 2021. All the data

Water in Palermo, the fault repaired and supply resumed in many areas: the map

Coronavirus, a vaccination ” marathon ” in Trentino. Fugatti: ” The goal is to administer 100,000 first and third doses in 5 days ”

Pokémon Diamond and Pearl, free gift for the Secret Base: here’s how to get it