The PSG midfielder on the penalty granted to the English: “Generous. Wembley will give us more strength too, winning would be a dream “

“Yesterday we all saw the match together (England-Denmark ed) and if I had been the referee I would not have called the penalty. I think it was a ‘generous’ penalty, but these are things that are part of football and can happen. As for Sterling, he’s a fantastic player. “So Marco Verratti, in a press conference from Coverciano, on the episode that decided yesterday’s semifinal at Wembley. “However, for Sunday we think that a great referee will be chosen – he added -, one who is used to the Champions League and important matches and who does not allow himself to be influenced, so we are not afraid of this “.

“England is a very physical team but with technically very good players – said the blue midfielder, speaking of the opponents – they deserved to play for this final. It will be a final, a match where both teams want to win as it is right. We will find a great team, they play in their home, it would be a dream to be able to win a Wembley. Rooting all for the British? Many of us are used to this climate, I think it is something that it will give us even more strength. We play a European final in a big stadium, I don’t think we can find more stimuli. The details will be fundamental, we will have to focus on the game and forget the rest. There is pressure, the team that has the most desire to have fun, to take it more lightly, can have a great advantage. ”
See also

Euro 2020
Euro 2020, controversy over the penalty for England: there were two balls on the pitch

“This and the one with Spain are two different matches – continued Verratti – The midfield can be the department where we can and must make a difference. We have to give the pace, we need a great game. They play in the middle of two, they are two of balance: you play badly against us, they don’t grant chances and they don’t concede goals. Every detail will make a difference. Fatigue? Now we are focused on the final, the enthusiasm makes you go further, see people in the squares, our friends, find myself here with Insigne and Immobile since the days of Pescara and we would never have imagined it … This makes us give everything, not it makes us have regrets once the race is over. We will be at peace with ourselves because we will give our best “.
See also 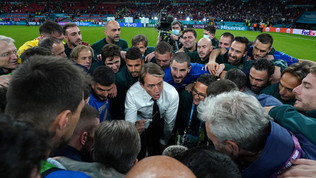 
The one with theEngland has always been a special match for the PSG blue midfielder: “I made my debut in the national team in 2012, I made my debut in the World Cup. And then it’s a match between two great national teams who deserve this opportunity, to be in the final. We both made a great journey, unfortunately only one will win on Sunday and … Let’s hope it’s us “.

In closing a comment on the purchases by his club Donnarumma (only the official status is missing) e Sergio Ramos: “Gigio is proving to be a great goalkeeper, he deserves to be in a top European club. He deserves the Champions League which is our goal, I’m happy for him and for the team, he can give you a lot. Sergio Ramos has proven to be a champion , he has won everything in his career and can give us a hand. I am happy that he has chosen the PSG project, it shows our great work. We are doing a great job, I am happy and I look forward to working with him. “

PREV «Replay the quarter-finals against Italy. But to lose again »: the petition of the Belgian fans that makes fun of the French
NEXT Italy shines and dreams, the race towards Wembley and the numbers of a success

Comunali Milano, Usuelli: “The doctor-candidate Bernardo goes around armed in the hospital”. He replies: “It’s not true, lawsuit”

The best breakfast against constipation that will solve the problem immediately