Itzhak Levanon, former ambassador of Israel to Egypt, author of this article

One of the first decisions of the new administration of US President Joe Biden was to rejoin the UN Human Rights Council in Geneva. Former President Donald Trump had left the organization stating that it was extremely biased towards Israel.

Personally, I believe that the decision to return to the Council is right and bodes well. It is worth trying to transform a troubled organization from the inside rather than letting our enemies do whatever they want. Israel has said on several occasions that the UN Human Rights Council is so biased and dishonest that we have no need to be in it. In practice it is true. But just as you don’t desert a military outpost even if it is considered of secondary importance, so you don’t leave an international organization that goes after you.

The United Nations Human Rights Council (UNHRC) was created just over a decade ago on the ruins of the United Nations Commission on Human Rights (UNCHR). Over the course of a whole year of debates, in which I took part, the best mechanism for the new body was discussed. We had a lot of hope in creating a fair and just organization. Indeed, the new Council was found to be more efficient than the previous Commission. All countries, without exception, should have submitted to the scrutiny of the Council during two days of debate on the state of human rights in their respective countries and would have been called upon to implement its recommendations. Unfortunately, the new Council has also inherited some negative elements. One of these is the Commission’s bias, the special article against Israel: we failed to put an end to this blatant discrimination, to my utmost frustration. 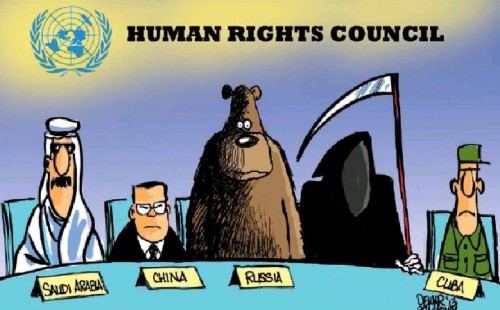 By announcing its re-entry to the UN Human Rights Council, Washington expressed its intention to initiate changes in the functioning of the body: a commendable intention that must be encouraged. Only a superpower like the United States can lead such a profound reform process.

Here are two measures that, if adopted, will allow both the United States and Israel to coexist peacefully with the Human Rights Council. The first is to cancel that article 7 which only targets Israel (by requiring the Council to discuss anyway, in each session, the actual or alleged human rights violations by Israel and Israel only ed). Only then will Israel be equal to all other members of the Council and like everyone else will it have to submit itself fairly to the scrutiny of the Council.

The second measure is to change the process of electing members called to serve on the Council for three years. Today these elections are held on a regional basis. Instead, countries should be elected on their merits, on their human rights performance. This would put an end to the farce that criminal regimes like Syria, Iran, Cuba and the like sit with impunity and shame on the stage of the Human Rights Council.

Knowing the agonizing human rights violations in several countries, civil wars, coups d’état, press persecution of opponents and NGOs, these reforms within the UN Human Rights Council stand out as an objective of absolute urgency.

Dragons and snakes. The new security challenges of the West according to David Kilcullen

Lorenzo Mesini reviews The Dragons and the Snakes. How the Rest Learned to Fight the West, the book by David Kilcullen, a former...
Read more
USA News

Powell, the US economy will return to normal at the end of the year with vaccinations

Jerome Powel, governor of the Federal Reserve System, presents the semi-annual report on monetary policy to the US Congress and with it shows the...
Read more
USA News

Semiconductors: the US wants to see clearly on the blocks of the production chain

The crisis in the semiconductor market - which is causing major shortages with regard to the supply of chips globally - is officially among...
Read more
USA News

Uniss lands in the United States

Published on ?? Neurology ?? the editorial by two Sassari professors and their American colleague in which they hypothesize that some drugs, which...
Read more
USA News

Universities, 40% of Italian universities are among the top 1000 in the world: better than the USA, China, France and Germany

A more than satisfactory average result What, then, is the reputation of Italian universities? And what are the factors that determine it? The...
Read more
USA News

Johnson & Johnson’s single-dose vaccine approved in the US: “Strong protection”

Eventually the green light for the Johnson & Johnson vaccine arrived, at least in the United States. Experts from the Food and Drug...
Read more
USA News

“J&J vaccine 72% effective”, authorization in the US this week

By the weekend, the US will approve a new anti-Covid vaccine, that of Johnson & Johnson.The Food and Drug Administration (Fda) in an analysis...
Read more

‘Terrible scars on the lungs’: the real reason why Giovanni Ciacci is out of the Island of the Famous

‘We will relaunch Maserati’, word of Carlos Tavares

ABOUT US
Italy24 News English is your news, entertainment, music fashion website. We provide you with the latest breaking news and videos straight from the entertainment industry.
Contact us: [email protected]
FOLLOW US
© italy24news.com