Google announces 6 new functions for Android and various of its applications: here are the news

Google goes down hard this evening and announces well six new features that within the next few days will be included in as many of its applications: the news, in fact, concern Android but specifically concerning Google Chrome Password Checkup, Google Maps, Android Auto, Google TalkBack, Google Assistant and Google Messages.

Nothing new in an absolute sense because the Password Checkup it has already existed for a while within Google Chrome for computers but now it is integrated directly into Android, from version 9 Pie upwards, thus completing what is offered by the mobile version. From now on, in fact, Password Checkup will check the passwords every time one is entered into any smartphone application using the Google auto-complete function with a list of compromised passwords, so as to notify the user should there be a feedback so that he can check and modify it.

Message scheduling finally comes within Google Messages, which now allows you to schedule sending by setting time and date: just write the message, then press and hold the send key and here select the time and date in which to send the message, provided you have a smartphone with at least Android 7 Nougat.

Google, says it, has worked closely with blind and visually impaired communities on this renewal of Google TalkBack to incorporate the most requested features, including: more intuitive gestures, a unified menu, a new menu for reading control and various other features.

New actions with Google Assistant on the lock screen 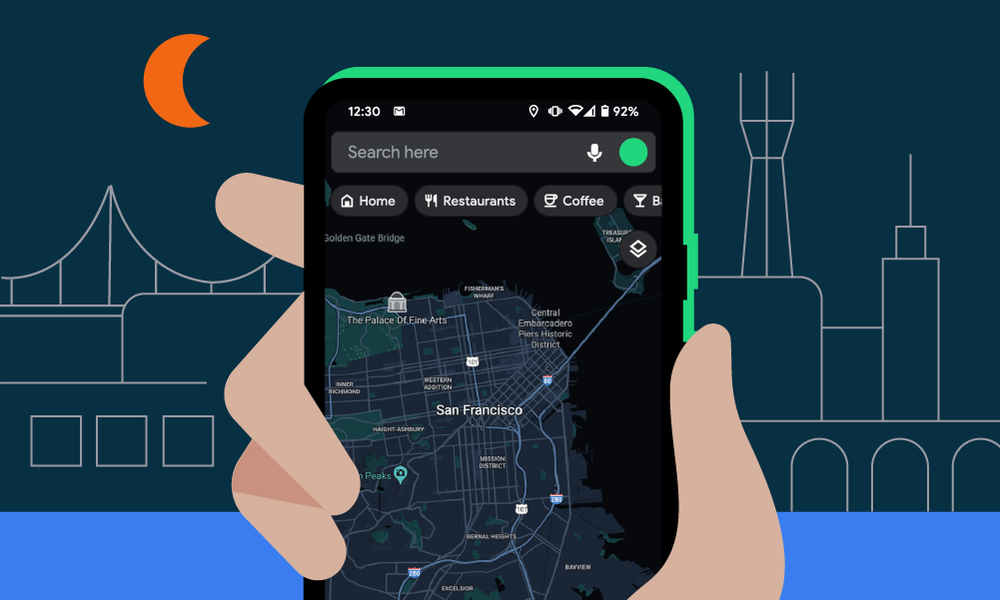 And with this other novelty we risk going to 10 minutes of applause for Google. Seriously, Dark Mode is finally official for Google Maps: from tonight you can select it from the application settings, where now you can choose between dark, light and system theme.

We’ve had a big taste of it in the past few weeks, but all of it was only announced tonight by Google for Android Auto. Now, therefore, Android Auto supports the customization of the background, with the possibility to choose among the many inspired by cars, it integrates voice-activated games, such as quiz and “Jeopardy!”, To distract yourself during long journeys, allows you to customize the home through shortcuts so as to quickly launch contacts, weather forecasts, thermostat adjustment and other things, it supports multi-window to use Google Maps and music controls at the same time and, finally, it adds a kind of parental control to set a view with an eye for privacy so as to have full control over what is shown on the display.

Deep Nostalgia ” soul ” the old photos! The results are disturbing but also surprising

The photos that suddenly come alive when you look at them. It looks like a scene from one of the Harry Potter...
Read more
Technology

Ratchet & Clank for PS4 free on PlayStation Store for the Play at Home initiative – Nerd4.life

Ratchet & Clank per PS4 it's available free for download from PlayStation Store as part of the Play at Home...
Read more
Technology

the previous one was too ambiguous

A few weeks ago Amazon updated the app for iOS and Android with a new icon which, however, in the eyes of many was...
Read more
Technology

Deathloop, the operation of the time loops explained in a video diary – Nerd4.life

The formula of Deathloop is based on the presence of loop temporali, and the game's game director, Dinga Bakaba, explained...
Read more
Technology

Jorge Lorenzo back on the curbs: in Italy and with Lamborghini – MotoGP

Jorge Lorenzo is back on track. This time with theinseparable friend Luca Rosiello e on 4 wheels. But...
Read more
Technology

FOR EUROPE - The name of this original-looking front-wheel drive crossover comes from the French town of Bayonne: an indicator of how good it...
Read more
Technology

the lineup of the early evening

Boom of infections in the city: municipal offices closed

Covid, Antonelli (Cts): “The average age of hospitalized patients has dropped to 44 years. The only positive fact is the downward trend among vaccinated...

“I think there will be a new AS Roma stadium. I’d like to design it.”