AGI – If there is one sector that the Covid pandemic has made grow it is that of real estate auctions, which in the last six months of 2020 were the protagonists of a real boom, with a 63.5% growth in the number of auction houses.

We are talking about 15,146 procedures detected at the end of the year compared to 9,262 in the previous month of July, according to the numbers released by the semi-annual report on real estate auctions of Sogeea Study Center, presented this morning in the Senate.

A market worth 1.5 billion, of which, excluding the costs for the procedures, about 1.4 billion are destined for banks. It can be approximated to the value of revenues for the tax authorities is around 160 million euros with the registration tax.

On the other hand, the amount of renovations that will follow the acquisition of the properties can be estimated at around one billion. In this case, the revenues for the state coffers between VAT and taxes can be quantified in about 270 million.

And in the last half of the year of Covid, not only houses were foreclosed and ended up at auction, but also 4 castles, 15 hospitals, 8 theaters and 17 convents.

“We are almost used to the fact that a family in difficulty may be unable to pay the mortgage and can see their home sold at auction, we are almost used to it – he explained Sandro Simoncini, president of Sogeea and director of the Study Center – as we are used to seeing entrepreneurs who, believing in their company, guarantee investments with their home; we hardly think that in the difficult situation there can be a charitable, socially useful organization or a noble family. The data concerning the categories show how the drastic national situation is directed towards those difficult conditions from which, at this moment, no one can escape ”.

Nor alberghi, bed & breakfast, motel, campeggi and other reception facilities, sunk by lockdowns and the now chronic lack of tourists. The number of hotels at auction in Italy has increased by 7% in six months: the ongoing procedures concern 128 structures compared to the 120 recorded at the beginning of July 2020. Almost 30% of the properties analyzed are located in North. The Italian region with the most facilities at auction is Lazio with 16, 15 in Sicily and 13 hotels for sale in Sardinia.

“As happens in the residential sector, also in this case it is above all the entrepreneurial realities of small size“, Simoncini observes again.

Returning to the houses put up for auction, Sogeea rattles off the numbers: about a third of the houses for sale (5,798 units) are concentrated in North of the country, macro-area in which the surge in forced procedures was equal to 27.7%. 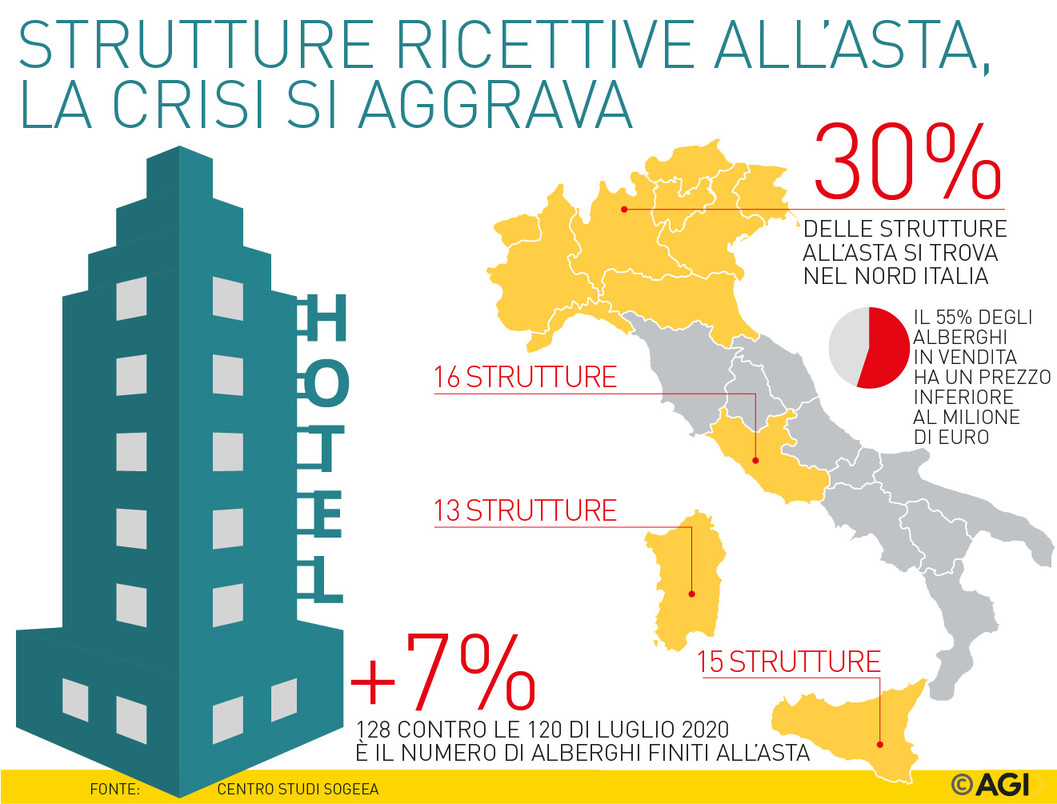 “The resulting picture is that of a country that tremendously struggling to get out of the crisis significantly aggravated by the pandemic – stressed the
president of Sogeea – at the same time it can be assumed that throughout Italy the people who find themselves in economic and financial difficulties are drastically increasing, even if the credit institutions have become less aggressive towards those in distress, aware that the value of the properties it has drastically dropped in recent years and, as a consequence, an auction would still not allow it to return the capital paid out “.

Hence the request for “a true support for those who are no longer able to pay the mortgage and want to keep their first home – continues Simoncini – a guarantee fund that allows families to have a two-year pre-amortization without paying the capital and the extension of the residual duration of the loan (double or triple), in order to drastically reduce the monthly payment. This is the only way – concludes the director of the Sogeea study center – to avoid a subsequent significant increase in suffering, from which at that point it will be difficult to get out of the next survey “.

thus Covid could have originated

Covid, contagions on the rise: the whole of Ossola now risks the red zone

No one officially declares it, but the data that on Wednesday will be evaluated on...
Read more
Coronavirus

“Never so many infections among children, in 20 days more than all of 2020”

While the storm rages outside and every day that passes looks like only a count of infections that go up and down, also following...
Read more
Coronavirus

Endless emergency in Ciociaria. On the first day of the orange zone, the cases of variants explode. But...
Read more
Coronavirus

It started there Italian revolution. "We don't keep people anymore," a friend in law enforcement confides to me. “Before they understood, they...
Read more
Coronavirus

Covid, here’s what’s in the new Dpcm that blocks Easter but loosens the bans

Farewell to the cashback bonus. Draghi cancels all refunds

“There were two more penalties and a red”

Binotto ready for the revolution, Leclerc and Sainz skeptical

Cassano: ‘Inter, but which domain? Ridiculous in the cup, he doesn’t play good football. Conte is not Guardiola, he takes us by...