FROM OUR SEND
HERAT – We don’t want Afghanistan to go back to being a safe place for terrorists. We want to continue to strengthen this country by also giving continuity to the training of the Afghan security forces so as not to lose the results obtained in these 20 years. With these words, Defense Minister Lorenzo Guerini on a visit to Herat for the flag drop closed the Italian mission in Afghanistan.

And there was also a diplomatic dispute. Despite the flight plan already agreed, the United Arab Emirates prevented the Air Force Boeing 767 from flying over the country with 40 journalists on board departing from Pratica di Mare. The plane was in fact blocked for three hours at the Dammam airport in Saudi Arabia and then resumed the journey to Afghanistan. The issue did not depend on us, some diplomatic initiatives were taken, the Emirati ambassador to the Foreign Ministry was summoned to ask for explanations and to express all the disappointment and amazement at having denied the overflight with respect to decisions that were already been communicated, hired and guaranteed, Guerini commented on the sidelines of the ceremony.

And so we leave Afghanistan. We start with our tails between our legs, accompanied by the nightmare of the Taliban advance, the fear that Al Qaeda and Isis will take advantage of the new failed state to expand their local bases using them as a springboard for operations abroad. Mullah Omar’s descendants in the Doha negotiations with the Americans and the Kabul government promise that they will be different. In the meantime, many schools for girls are closed or limited in their programs in ever larger territories, which gradually fall under their control. It looks like the eclipse of a major civil society renewal project that aimed to revive fundamental human rights. The Taliban promise a peaceful future, but the number of Afghan government officials, soldiers and policemen kidnapped or killed is growing every day. Journalists are constantly risking their lives. The Americans and NATO commands still do not say it openly, for over 50 percent of the country out of control. The security services of the International Red Cross and major non-governmental organizations softly admit that chaos is now affecting 70 percent of the country. Only the major cities still partially obey the central government of Ashraf Ghani, the countryside is prey to new warlords and returning jihadists.

It is no coincidence that the withdrawal of international contingents takes place with the utmost security measures. Their bases look like besieged forts. Ministerial visits are kept secret for fear of attacks. One wonders if the billions spent by NATO on the training of the Afghan security forces have not been thrown away. To see the severity of their defeats comes to mind the rout of the Iraqi army (in turn trained by the coalition headed by Washington which also includes Italy) in the face of Isis cutthroats in Mosul in June-July 2014.


A moment of the ceremony

After all, what could have been done differently? What was the point of continuing a commitment like this, unleashed with the UN approval in response to the Qaedist attacks of 11 September 2001, and which after twenty years now seemed increasingly bogged down? The Afghan campaign was more than four times longer than the Second World War, the American press points out more and more skeptically. Choosing is not easy: staying does not guarantee anything, the only certainty would be the dripping of our dead or wounded soldiers; leaving opens for serious prospects. At first it certainly wasn’t like that. The first vanguard of Italian soldiers landed at the Bagram base on 30 December 2001. About forty kilometers away, at the bottom of the valley, Kabul had witnessed the disorderly flight of the Taliban less than two months earlier. The Carabinieri of Tuscania together with the soldiers of the Cavalleggeri Guide found themselves facing the ruins of a city that had been at war for over three decades. Everywhere you could see the carcasses of Russian tanks and tracked troop carriers. Afghanistan in 1989 had been the Vietnam of the USSR against the holy war of the Washington-backed mujahedin. This will not be the umpteenth failed invasion, repeated President George Bush, convinced that he had avenged the attacks on America, decided to take Osama bin Laden soon (it would have happened only 10 years later), and happy to limit the number of troops Use of land making extensive use of local tribal militias passed arms and baggage to the side of the new winners. For some time he focused on internal democracy. The new president Hamid Karzai, Pashtun like the Taliban, promised renewal. Schools for girls reopened. Banks connected with the world, roads, bridges, irrigation systems were rebuilt, the capital’s airport was completely redone. Rome on 3 October 2002 voted to send 1,000 Alpini destined for the city. Meanwhile, for international attention, he focused on Saddam Hussein’s Iraq. The UN did not support the American attack of March 2003. Afghanistan seemed forgotten for a moment. But in August it was noticed that the situation was deteriorating. The Taliban who fled to Pakistan were raising their heads, the old warlords were dividing the country, the drug market was starting up again. On October 13, 2003, the UN Security Council attempted to run for cover by approving the extension of the mandate of the military mission to the whole country. 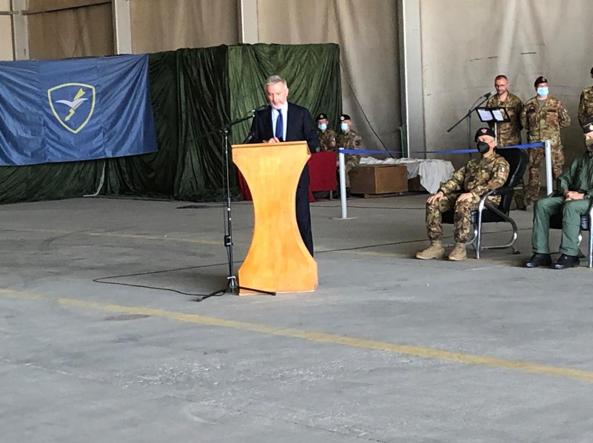 Minister Lorenzo Guerini during the ceremony

In addition to participating in the safety of the Kabul area, Italy was entrusted with the entire western part of the Herat region. The PRTs, civilian support organizations, appeared. In a short time we had gone from military hunting against Al Qaeda to the choice of rebuilding the whole of Afghanistan. A huge commitment. The entire NATO-Isaf contingent saw about eighty countries actively involved. In Barack Obama’s first term, international soldiers peaked at over 142,000. The Italians reached almost 5,000, located in eight main outposts, some remote and surrounded by hostile villages such as Bala Morghab or the Ice base in Gulistan. We fought without waving it too much. The costs became stratospheric for Nato-Isaf: already at that time almost 900 billion dollars were estimated in total. But the results remained poor. The Taliban guerrillas had regained strength since 2006, especially in the eastern regions bordering the Pakistani tribal areas and in the south between Helmand and Kandahar. The dead grew. The first Italian victim was the corporal major Giovanni Bruno, following a road accident on October 3, 2004. The first fatal attack occurred on May 5, 2006, when a bomb exploded as a convoy of armored vehicles passed, killing Captain Manuel Fiorito. and Marshal Luca Polsinelli. Since then, 53 Italian soldiers have been killed. The entire coalition has lost almost 3,600 soldiers.

Not that attempts at renewal have been lacking. In January 2015 the fighter mission turned into Resolute Support. Aside from small US and British commando units, the rest of the internationals had to confine themselves to training Afghan security forces. The number of troops dropped to less than 20,000. Almost 900 Italians worked mostly in Herat. But even in this case the results were poor. It is estimated that the Afghan soldiers who have died since 2002 are over 65,000, the vast majority since 2015. Civilian casualties could be a quarter of a million. And little lets believe the data should not get worse.

PREV “We will miss him” – Libero Quotidiano
NEXT Rome – Municipal, Michetti: Stadium, Roma and Ama camps. Interview with the center-right candidate

Italy already in the round of 16, all combinations for placements in Group A