6-4 – Berrettini serves for the match and immediately earns three match points even touching a new ace; the first Kwon manages to cancel it; Not so the second: service in the center, ace n. 23 of the match and victory! 2h11 ”and round of 16. In the third set the Roman lost only 3 points on his serve.

5-4– Kwon keeps the service at zero

5-3– Now we need Berrettini who continues the series of winning services, 22 aces for 15-0; the 30-0 lucky with the help of the tape after a short ball to which Kwon had replied; At 40-0 the Italian misses the first serve, plays a short on the second and embroiders the backhand closing point and game.

4-3– Serves Kwon; Berrettini fights but the Korean runs away at 15-40, then closes the game.

4-2 – Berrettini serves and opens with a series of aces, three, reaching 21 in total and keeping the serve at zero.

3-2 – Nine consecutive points and Berrettini goes 30-0 on Kwon’s serve (the backhand of the second 15 is beautiful); the Korean returns to a tie, and moves to 30-40 and then closes the game.

3-1 – Berrettini is now at the service looking for the new extension; going forward 40-0 (ace number 18) and keeping the serve in all serenity.

2-1 BREAK Berrettini– on Kwon’s serve, he begins to use the short and very effective ball often, moving to 40-15 then with two new break points; the first good with a big inside-out forehand, and comes the second break.

0-1 – Kwon at the service; 1h36 ‘of play; so far Berrettini has had 9 break points, and has only used one; the Korean moves forward by two points and Berrettini remains attacked with a great straight down the line, 15-30, then catching up again; Kwon to close the game at 30.


The determination of Matteo Berrettini (Afp)

6-3 – Berrettini returns to serve with the important weight of the break he has just won; ahead 40-15, obtains two important set points; the first is enough to close at 6-3.

5-3 BREAK Berrettini – On Kwon Berrettini’s serve, he hopes to find the decisive break, and fights up to 40-40; rejects the first advantage of the Asian and wins his eighth break point; once again he sees it, however, canceled, in an increasingly balanced encounter; find the ninth, and the good one for the break.

4-3 – It opens with Berrettini’s 15 ace, the fifth of the second set; the game goes well and the blue keeps it at zero.

3-3 – At the change of sides, the South Korean will serve, while the audience leaves the stands of the Simonne-Mathieu for the start of the curfew due to the anticovid rules. Kwon does not seem to be affected and moves forward two points and then up to 15-40; Berrettini comes back up to 40-40, then surrenders to the advantages.

3-2 – At the service Berrettini goes wild and with two other aces he goes to 3-2, always keeping the opponent at 15 and always for a double fault.

2-2 – With the same score Kwon tries to restore parity:

1-1 – an ineffective Berrettini lob and Kwon takes the first point; the second an unforced error by the Roman for 0-30; Kwon’s long ball for 15-30, then Berrettini’s goal for 15-40; a straight to cross is worth 30-40; Kwon still holds the service;

1-0– Berrettini serves and immediately yields the first points, finding himself under 15-30; the recovery for c ‘, and the 25 year old from Rome goes to 40-40; the eleventh ace (to 1) is worth the advantage; a long response from Kwon brings Berrettini the lead, he starts the second set well. 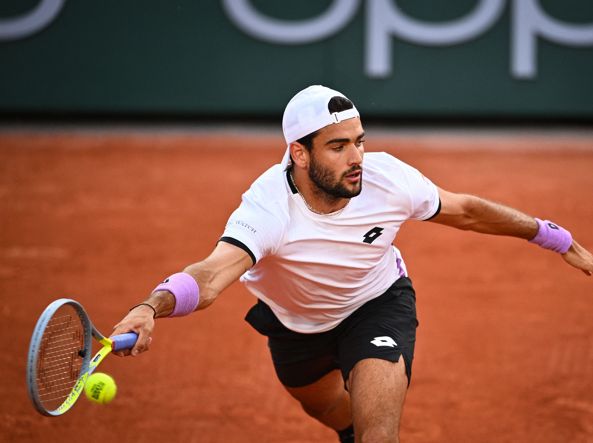 7-6 (8-6) – Kwon loses the first service, 1-0; Berrettini keeps his 2 for the 3-0 (tenth ace, at 214 km / h); Kwon signs only one point in his double round: 4-1; on the next service change, the first lost ball arrives instead from the Italians, after a prolonged exchange, 4-2; after the small break, the point of 4-3 also arrives and Kwon now has two opportunities to take off; in reality Berrettini puts in another mini break for the 5-3; thus arrives, on the Korean serve, the 6-3 and a long series of set points; he loses for the first two, on his serve, and finds himself on 6-5; Kwon serves by finding a tie: 6-6; on the Korean serve, Berrettini earns the fourth set point, 7-6; finally, of service, it closes.

6-6– Berrettini now serves to stay in the set; an imperfect muffled pushes the Korean forward; a heavy first is worth a draw, then an ace, the seventh, 30-15; a match response from Kwon for 30-30; then from the right with the eighth ace Berrettini goes and closes the game.

5-6– On Kwon’s serve three more break points from Berrettini arrive, who commands the opponent with the forehand and then takes advantage of another double fault; fails to exploit them (and rises to six not enjoyed); Kwon with 4 consecutive points is thus ahead of the advantages thanks to a long forehand of the blue; Berrettini finds himself for the rhythm and conquers a new break point, once again canceled; wrong answer from Berrettini and new Kwon advantage which then closes the game.

5-5– Berrettini on serve for the first time goes under with a double fault; only one incident remedied with a serve and dunk and with the fifth ace for 30-15; a long answer is worth 40-15 and Berrettini then closes smoothly with the sixth ace of his match.

4-5– the first mistake of Berrettini’s game, which does not lose heart and forces the opponent to 15-15; Kwon takes advantage of the first to get back the lead, then with a wrong backhand from Berrettini he goes on 15-40 and closes the game.

4-4– Berrettini serving with new balls and a dampened one and his third ace takes the lead by two 15s; He keeps his serve at zero with the fourth ace.

3-4– 20 ‘of play so far; Kwon in the service first realizes an error in response from Berrettini, then gives two consecutive points to his rival who makes him run a lot; hammering on the backhand, the Asian manages to reach 30-40; with an ace on the line he holds the serve.

3-3– Service Berrettini, immediately ahead of three 15 making good use of the first service; then keeps it at 15.

2-3– With the Korean serving, Berrettini’s forehand begins to be felt; Kwon for does not lose concentration and goes on 15-40; Kwon’s second double fault is worth 30-40; a nice backhand to allow Kwon to keep the serve.

2-2– Berrettini on the serve goes wild and goes on 40-0 with an ace, the first of his match; closes the game by yielding only a 15.

1-2– Second shift in service for Kwon; with a long exchange and the first double foul of the match, Berrettini escapes at 30-0, then gets three break points with a nice long line; Kwon manages to cancel all three by sending the shots well in depth; an ace gives him the advantage, then he closes the game with the fifth consecutive point.

1-1– First shift of duty for Berrettini; the first 15 arrives with a nice damping; the second for the 30-0 with a wrong answer from Kwon; a winning response from the Asian and a low vole in the corridor from the Italian bring the game to 30 all; 40-30 a long response from the Korean, then Berrettini closes the game with another unforced error by Kwon.

0-1– After the warm-up, the match is about to begin. Kwon shows up at the service; immediately 3 fifteen of advantage for the South Korean, the third point on a splendid short ball; Kwon keeps the service at zero.

Heating – There is no direct precedent between the two. It is played on the Court Simonne-Mathieu. Whoever wins faces in the second round or the German Dominik Koepfer, n. 59 of the world, or Roger Federer, n. 8.

US, Republicans in the Senate sink electoral reform

The clash explodes: the Vatican thunders against the Zan Bill. Has the Church of Bergoglio stopped obeying?

Total clash on the Zan bill, the fight breaks out between Borgonovo and Murgia – Il Tempo

Greta Nedrotti and Umberto Garzarella, united by the love for sport and travel – Corriere.it