Liguria. More than one in 5 Ligurian, among those “vaccinable”, has already completed the cycle: a fact that makes our region the first in Italy for the ratio of vaccinated to the reference population.

The data emerges by relating the number of people who completed the vaccination cycle (or because they arrived at the second dose, or because they received a single-dose drug) to the total of the reference population, i.e. the one to which the vaccine is aimed: subjects aged 16 and over.

A less positive figure, however, but still higher than the Italian average, if we include them in the count of vaccinated people people who have received at least the first dosis. Liguria has reached today (May 16) the 37,66% of the people to whom the vaccination campaign is addressed; a fact that places it ateighth placein Italy. In the lead is Trentino, with the autonomous province of Trento which has just crossed 40% (40.44%) and that of Bolzano is now close to exceeding the same threshold (today it is 39.94%). In front of Liguria also Lombardy (39.52%), Molise (39.41%), Veneto (38.87%), Puglia (37.88%) and Valle d’Aosta (37.69%). 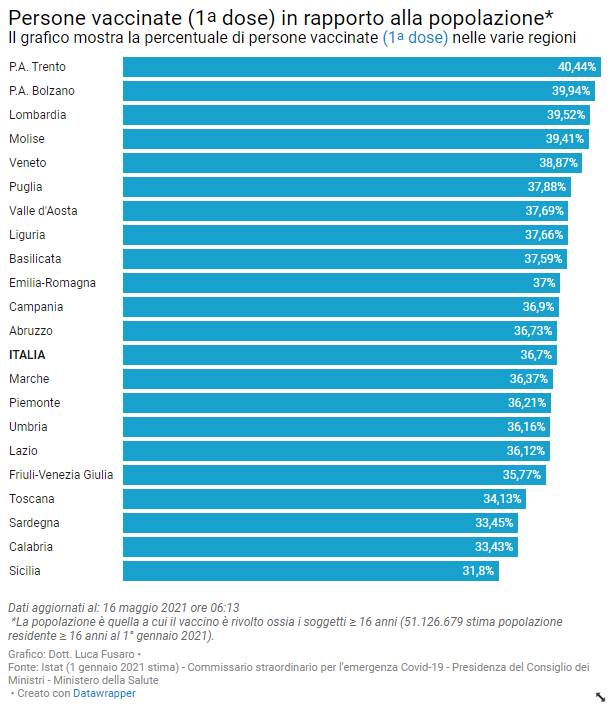 To develop graphs and estimates is Luca Fusaro, Master’s Degree in Applied Economics, Chartered Accountant and Data Analyst. Since the beginning of the pandemic he has collaborated with various paper and online newspapers, sending them graphs on Covid-19: among these also IVG and Genova24 (here our special elaboration with Fusaro in full lockdown ).

The graphs, therefore, indicate how the vaccination campaign is proceeding in our region with two different gears: if the first dose reaches the Ligurians with a speed in line with the national one, the second dose and single-dose drugs have been administered more quickly. A figure that obviously must also be related to the composition of the Ligurian population, which is the oldest in Italy: a factor that could have influenced the speed with which the second dose spread.

PREV Italy Rock. Corriere della Sera: “Mancini leader with a mission, get to Wembley”
NEXT so the masks have increased the disputes in Volo- Corriere.it

the demo of Konami’s “New Football Game” is available on PS5, PS4 and Xbox – Nerd4.life

Brothers of Italy on the attack: “Bianchi talks about school close to perfection? So many problems, from staff to mobility passing through chicken coop classes”