The exhibition will be held until 26 September at the Museum of Rome Roma. Birth of a capital 1870-1915 will tell the great historical and urban events that marked the Third Rome.

Igoddess on the occasion of the celebrations of the 150th anniversary of Rome Capital, is open to the public until 26 September 2021 at the Museum of Rome at Palazzo Braschi the new exhibition Rome. Birth of a capital 1870-1915. Retracing the historical events and the profound urban transformations of the Third Rome, he wants to propose a reading of the facts in a dialogue intertwined with the more daily reality of the life of the new capital, in its minute chronicle and in its various socio-cultural aspects.

In the exhibition itinerary played over a period of time that goes from the breach of Porta Pia to the First World War, develop three main thematic nuclei. They will be told through emblematic episodes that illustrate, together with historical events, urban transformations and the new architectures of the new capital, together with socio-cultural changes.

In the story, the approximately 600 works between paintings, sculptures, drawings, graphics, photographs and documentary material they come from public and private collections. They will be placed in continuous dialogue with the images taken from original films that describe Rome in the passage between the nineteenth and twentieth centuries and, at the end of the path, at the time of the celebrations for the end of the First World War.

A constant and significant presence along the way is represented by the photographic images of extraordinary quality made by Count Giuseppe Primoli between 1888 and 1903, which almost combine the documentary value with a reportage character front-letter.

Educational equipment, immersive installations, multimedia and video supports, sometimes accompanied by quotes from Italian and foreign writers, illustrate the many aspects linked to politics, art, commerce, nascent industries, tourism, sports, social and worldly life that made up thescaffolding on which to build the image of a city aimed at modernity.

To the great painting by Michele Cammarano with the breach of Porta Pia, which for its symbolic value opens the exhibition itinerary, some counterpoints film frames The taking of Rome (1905) by Filoteo Alberini, historical document presented for the first time in that year on the walls of Porta Pia and later re-proposed on all the occasions of the event.

The importance of the event and the fortune of his iconography will be represented by paintings (Bartolena, Ademollo, Tranzi) and original photographs that reconstruct the event.

To the portraits in painting and sculpture of the protagonists (Cavour, Garibaldi, Mazzini, Vittorio Emanuele) numerous paintings and celebratory documents alternate with Plebiscite, of an official and popular character (Luigi Riva, Plebiscite to Rome, Vincenzo Giovannini, The tricolor at the Farnesian Gardens), which highlight the resonance of the event in Rome and in the Kingdom.

The breach of Porta Pia in a lithograph of the time (via Wikimedia Commons).

Rome as the protagonist of the exhibition

Through the planimetric representations of the urban territory and the wholesomeness of the air, the dramatic is also told relationship of the new capital with the scourge of poverty and malaria. The large painting by Federico Zandomeneghi, The poor on the steps of the church of San Gregorio al Celio, testifies to the state of poverty and suffering of a large part of the population.

An important space is dedicated to illustrating the close relationship between Rome and the Tiber. The river, a communication route and a place for trade and leisure, is also experienced by the inhabitants as a constant danger linked to the very frequent and destructive floods.

The exhibited works (model of the Port of Ripetta, paintings, photographs and floor plans) testify to the ambivalence and coexistence between the two aspects.

The history of a city

The visitor then retraces the urban transformations of the Capital through the exhibition of models, architectural projects and decorative sketches of the most significant buildings built in those years. Accompany one rich archive documentation on the history of demolitions and construction of the most representative and emblematic monuments of the Risorgimento epic.

Accompanied by phrases of writers and intellectuals who have reflected on events related to the destruction / construction of the city (Gabriele D’Annunzio, Ermanno Grimm, Émile Zola). Of these major changes will also be shown feverish activity on construction sites. These will also open your eyes to new ones social and political issuese, from the workers and proletarian presence to the birth of socialism.

Object of focus also specific are the birth of new neighborhoods and the transformation of the Ghetto, with the realization of the new Synagogue. Of this there will be the wooden model of the Tempio Maggiore and the preparatory sketches for its decoration from Jewish Museum of Rome. In fact, next autumn, this will host an exhibition dedicated to the celebrations of Rome capital entitled 1848-1871. The Jews of Rome between segregation and emancipation. 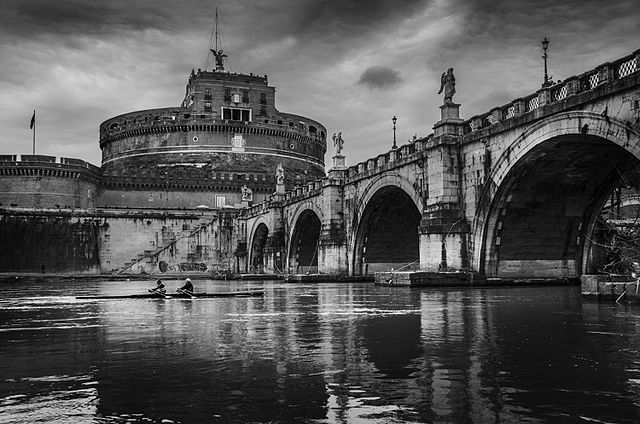 Rome and the Tiber (via Wikimedia Commons).

A walk through time

The great hall of the Museum it is also dedicated to an ideal stroll through Rome. Numerous posters from the important are proposed here Salce di Treviso collection. There is also one show in the show, consisting of approx 70 almost unpublished images, dedicated tophotographic activity of Count Giuseppe Primoli and created in collaboration with Primoli Foundation.

With the election of Ernesto Nathan as Mayor of Rome we are witnessing a modernization unprecedented of the capital. In these years, moreover, important school-related projects and to the promotion of the international image of Rome. Here in fact takes place the exhibition of fiftieth anniversary of the unification of Italy in 1911.

The exhibition finally ends with the room dedicated to the outbreak of the war. With its enormous political and social upheavals, it is a crucial watershed in the history of the twentieth century.

Alla screening of some fragments taken from the film Gloria with images of the conflict and some photographs of interventionist demonstrations – accompanied by one actor’s reading of the words of Gabriele D’Annunzio in favor of entering the war -, a room with an immersive effect is reserved.

The exhibition concludes with some interventionist paintings by Giacomo Balla, whileand The Last Vigil by Edoardo Gioja symbolically represents the end of the conflict with an effective synthesis.

The exhibition Rome. Birth of a capital from 1870 to 1915 is promoted by Roma Culture, Capitoline Superintendence for Cultural Heritage and by Flavia Pesci, Federica Pirani and Gloria Raimondi. It makes use of a scientific committee chaired by Vittorio Vidotto. They are part of it Maria Vittoria Marini Clarelli, Bruno Tobia, Elisabetta Pallottino, Federica Pirani, Gloria Raimondi, Nicoletta Cardano, Rita Volpe. Organization of Zètema Culture Project.

The Roma 150 Committee, the Centro Sperimentale di Cinematografia, collaborated on the realization of the exhibition – Cineteca Nazionale, the Cineteca di Bologna Foundation, the Primoli Foundation. Furthermore, the Istituto Luce – Cinecittà, the National Museum of the Salce Collection in Treviso, il Jewish Museum of Rome. Finally, the Department of Architecture and the Department of Education of theUniversity of Roma Tre and the National Academy of Santa Cecilia.

Finally, a special thanks goes to the Chamber of Deputies courtesy of major loans. The catalog edited by Federica Pirani, Gloria Raimondi and Flavia Pesci is published by By Luca Art Publishers.

For information on the entrances and purchase of tickets for Rome. Birth of a capital 1870-1915 consult the site: www.museiincomuneroma.it

Online purchase is mandatory for access on Saturdays, Sundays and holidays within the day before. For the other days it is strongly recommended.

PREV Coronavirus Lazio, there are 164 new positive cases. Hospitalizations and deaths are also decreasing
NEXT so the masks have increased the disputes in Volo- Corriere.it

Bitcoin returns towards $ 40k, this time thanks to Musk From Investing.com

Aaa wanted cellarmen, dozens of companies looking for this figure