Last summer BOA presented a new version of their famous and revolutionary patented closure system, born exactly 20 years ago to improve and speed up the closure of snowboard boots and for years also widely used in the MTB field, especially as regards shoes. . BOA has supplied us with a pair of Scott MTB RC SL shoes in order to specifically test their new Li2 system, comparing it with other BOA Fit Systems already on the market such as the very popular IP1.

In designing the new Li2, BOA’s goal was to improve their product with a top-of-the-range model that was more compact, more robust, more durable, more powerful and even more precise… in short, a decidedly ambitious goal. The new Li2 does not outclass the other BOA Fit System models but has actually improved each of these aspects, so mission accomplished. The basic operation is the same as that of the other models: you press the wheel in place to hook, rotate clockwise to tighten the cable or counterclockwise to release, while to unhook and then completely release the cable just pull the wheel upward. The Li2 system has one click every 10 ° of rotation in both directions, then 36 clicks for each complete revolution instead of the 32 clicks of the IP1 system.

The wheel of the BOA Fit System acts by putting tension on the new CS2 lace formed by 7 cables in turn made with 7 steel wires each, all covered by a sturdy nylon sheath that protects the steel cable from water and dirt. and allows it to slide easily on the special guides, reducing friction. With the new Li2 system, BOA also presents a new super light cable, called TX4, made entirely of polyester fiber. 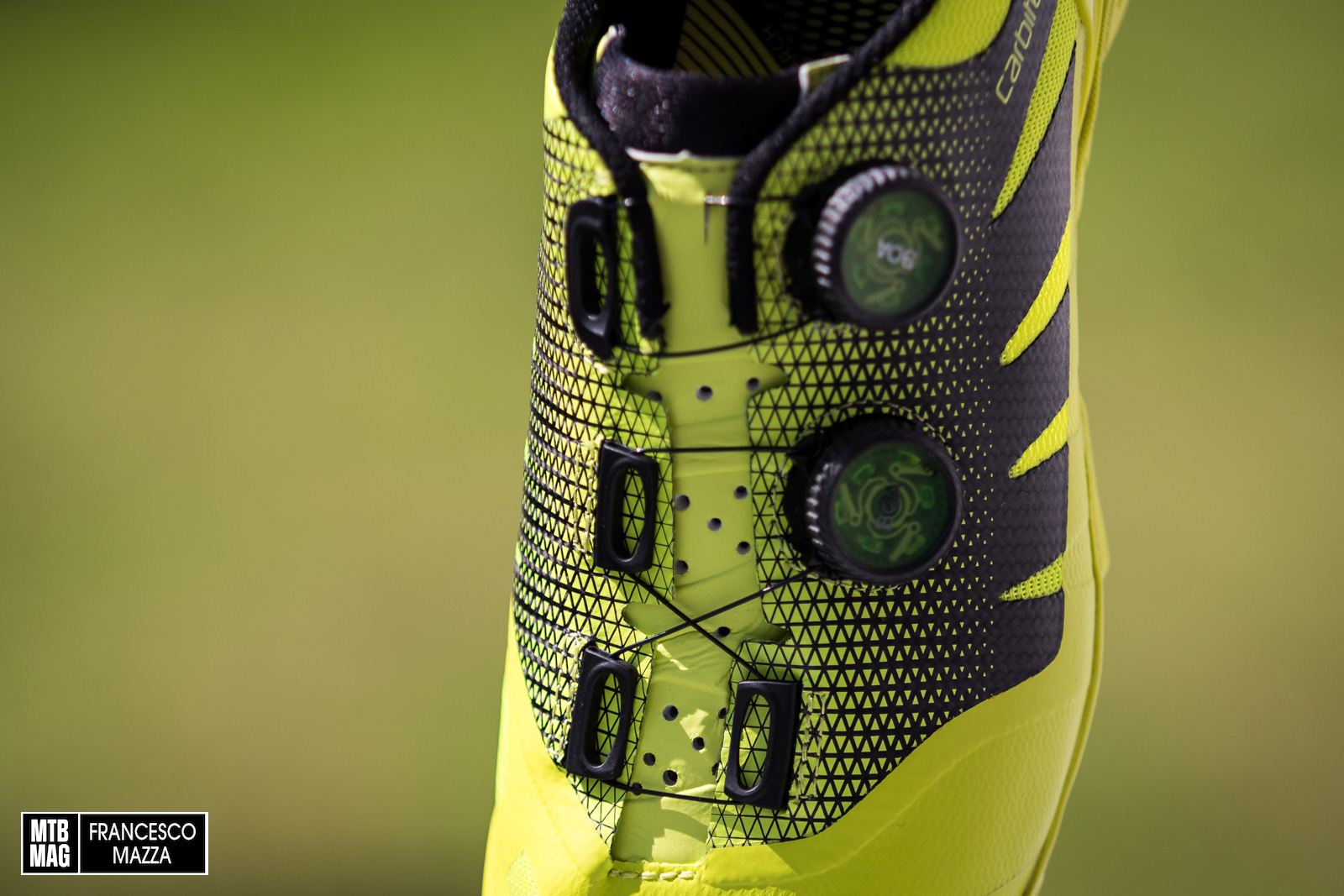 Three different options are associated with the Li2 system as regards the design of the wheel, with the same technical characteristics but with a different feeling of the handle for each variant and clearly with some aesthetic differences. Speaking of aesthetics, I found the option made specifically for Scott MTB RC SL shoes very intriguing with the upper surface of the wheel in transparent polycarbonate that reveals the internal mechanism of the BOA Fit System and allows you to observe the functioning of the ratchets. 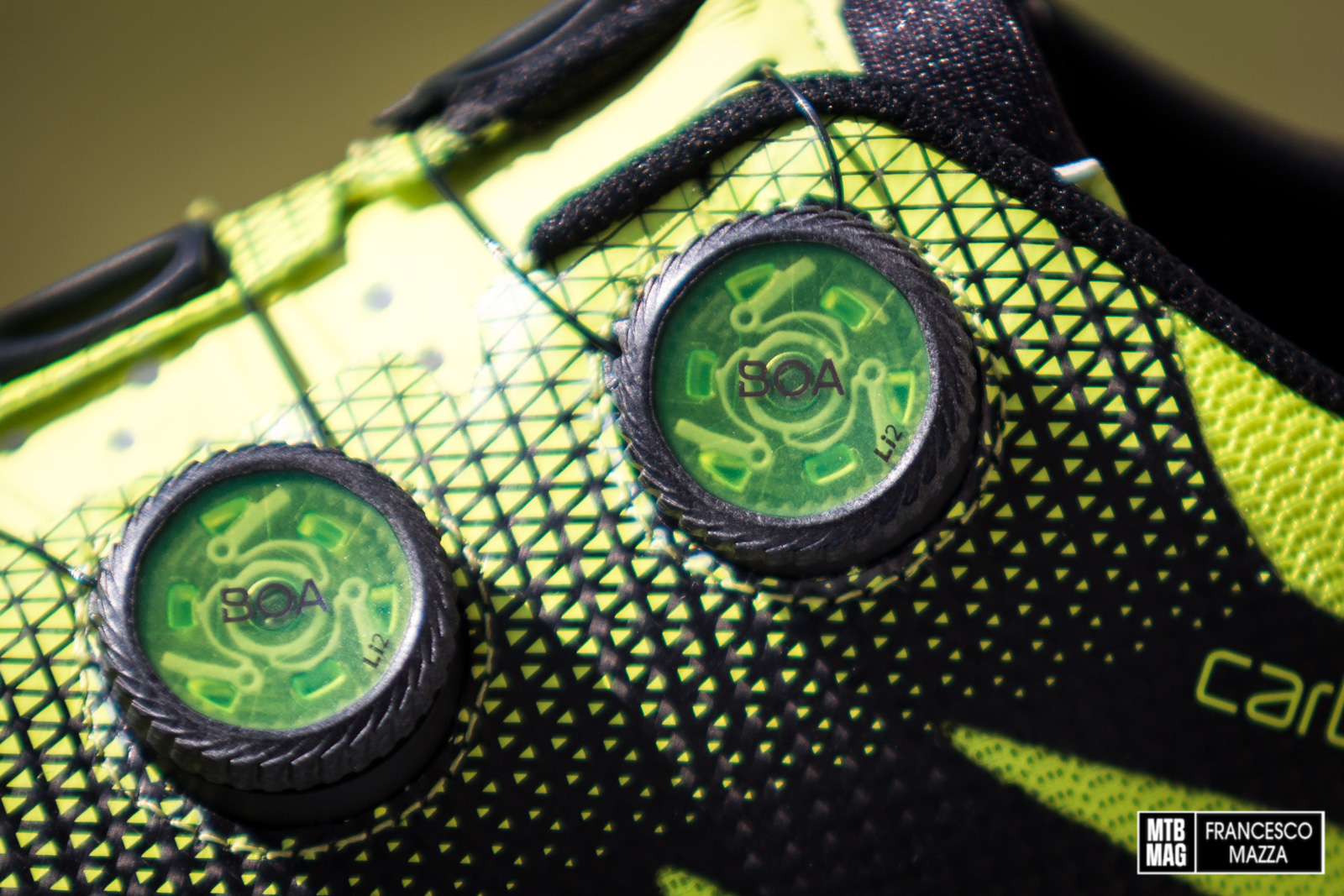 One of the main innovations introduced by the new Li2 version of the BOA Fit System is the greatly reduced size in terms of thickness. Taking as a term of comparison the IP1 model, the most popular especially in the field of mountain bike shoes, the new Li2 is 20% lower. According to the wheel that is adopted, the overall thickness of the Li2 system varies from 11.2 to 11.5mm against 14.3mm for the IP1 model. 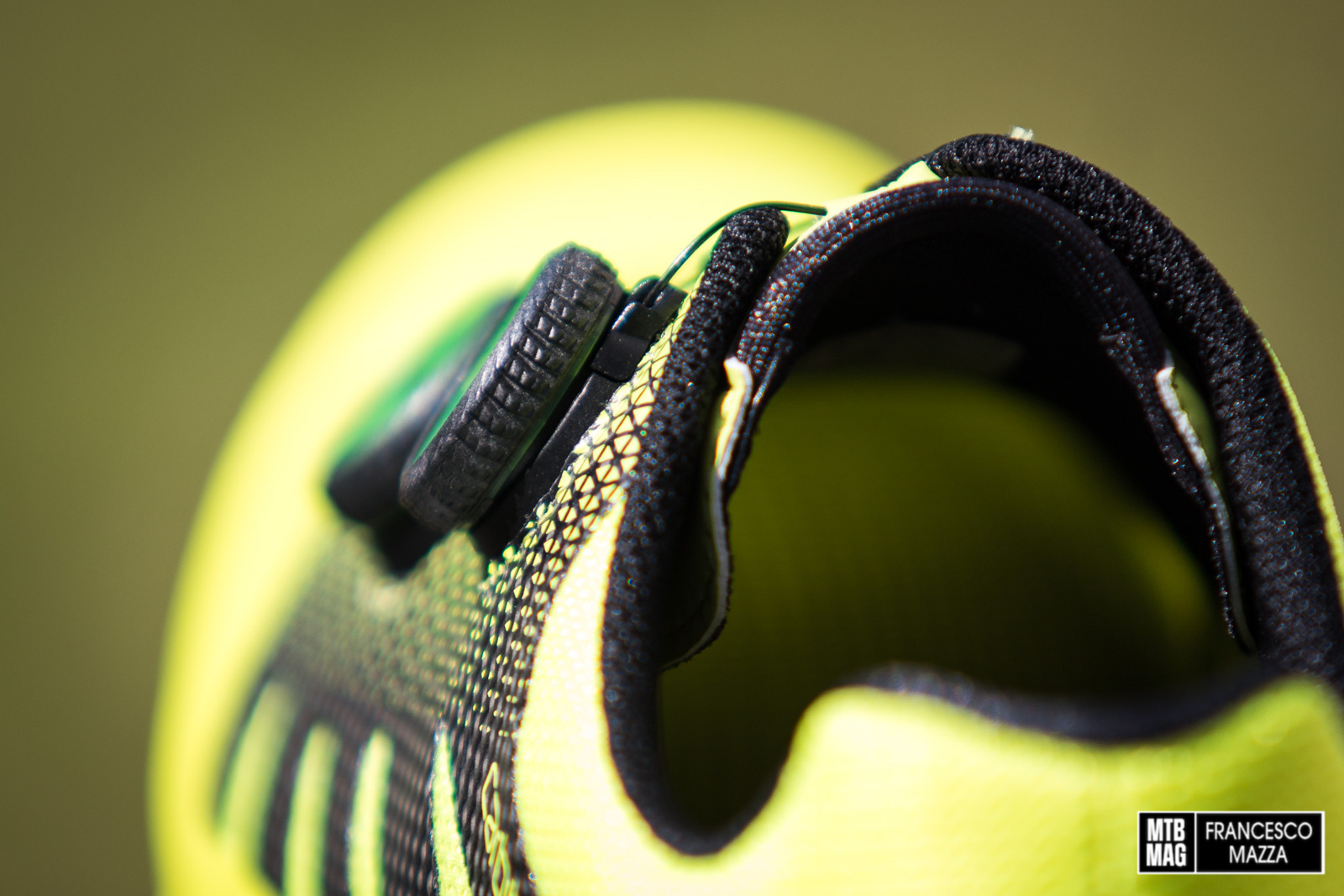 Like the other BOA Fit Systems of the L series, the new Li2 is also equipped with a bayonet release mechanism that allows the cartridge integrated in the wheel to release from the support in the event of strong impacts, so as not to be damaged. The cartridge can then be reinserted in its seat to continue to be used and thus allow the lap to be completed. However, BOA recommends replacing the cartridge as soon as possible because once the bayonet has been released, correct sealing is no longer ensured. 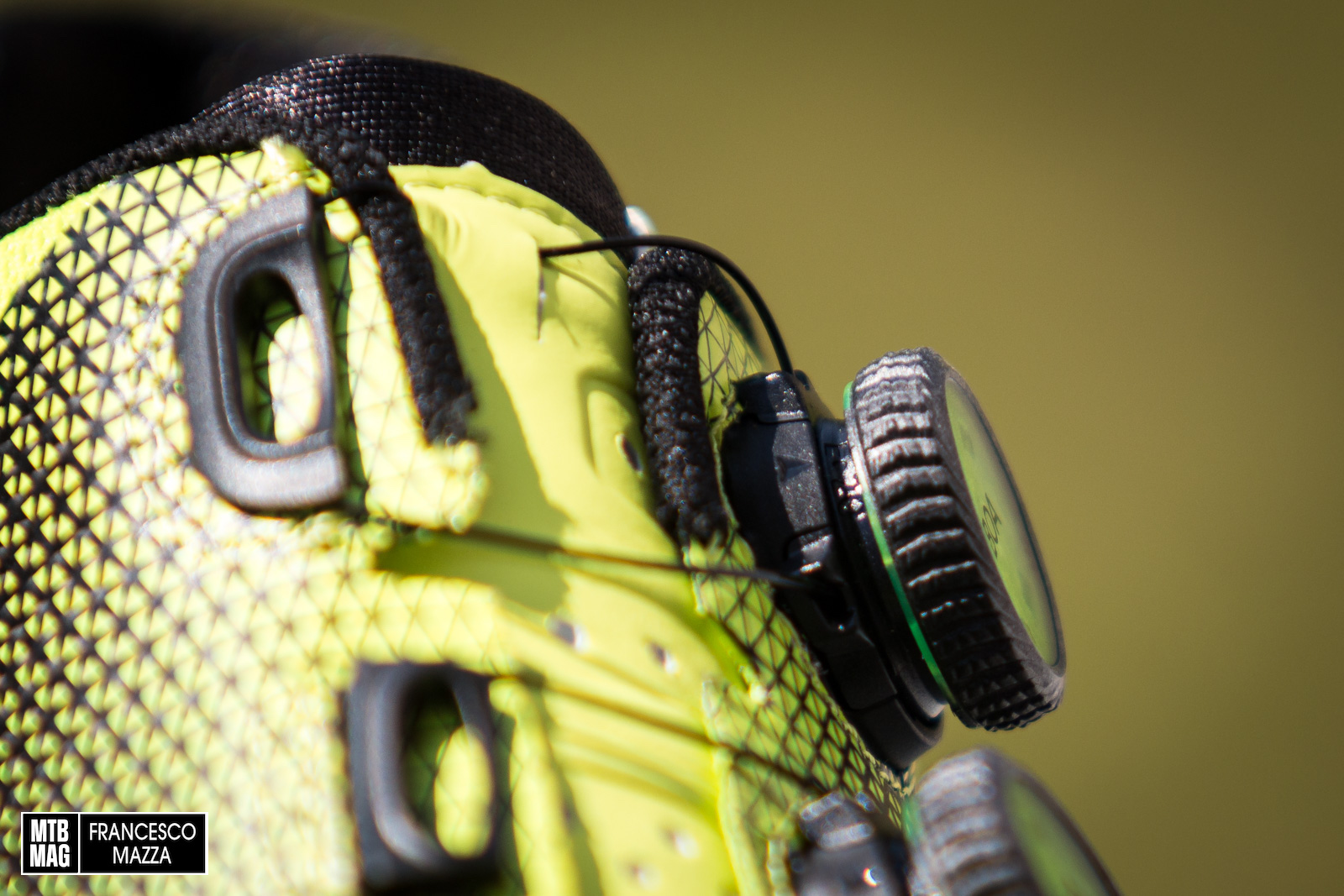 Using the new Li2 system, there are no differences with respect to the previous models as regards the routing of the cable, which has remained basically unchanged and is still an aspect mainly linked to the way it is applied on each shoe model. The differences are clearly felt by operating the new wheel which offers a distinctly different feeling from the previous models, both to the touch and to the functioning. You perceive greater precision and an even clearer and more distinct definition of each single click in both directions of rotation. Also improved the accuracy of the adjustment thanks to the 36 clicks. In general, the whole mechanism of the Li2 system gives the feeling of being very robust, not only in both directions of rotation but also when the wheel is hooked and unhooked. In spite of its reduced thickness, the new wheel is more ergonomic and easier to grip, also thanks to the pronounced knurling present both on the outer edge, where it is more marked, and on the upper one. The material on which the knurling is imprinted is a composite of polycarbonate and glass fiber, printed directly on the wheel, a very robust material that ensures the Li2 system excellent protection from any impacts, also thanks to the reduced thickness which exposes it to fewer risks. . 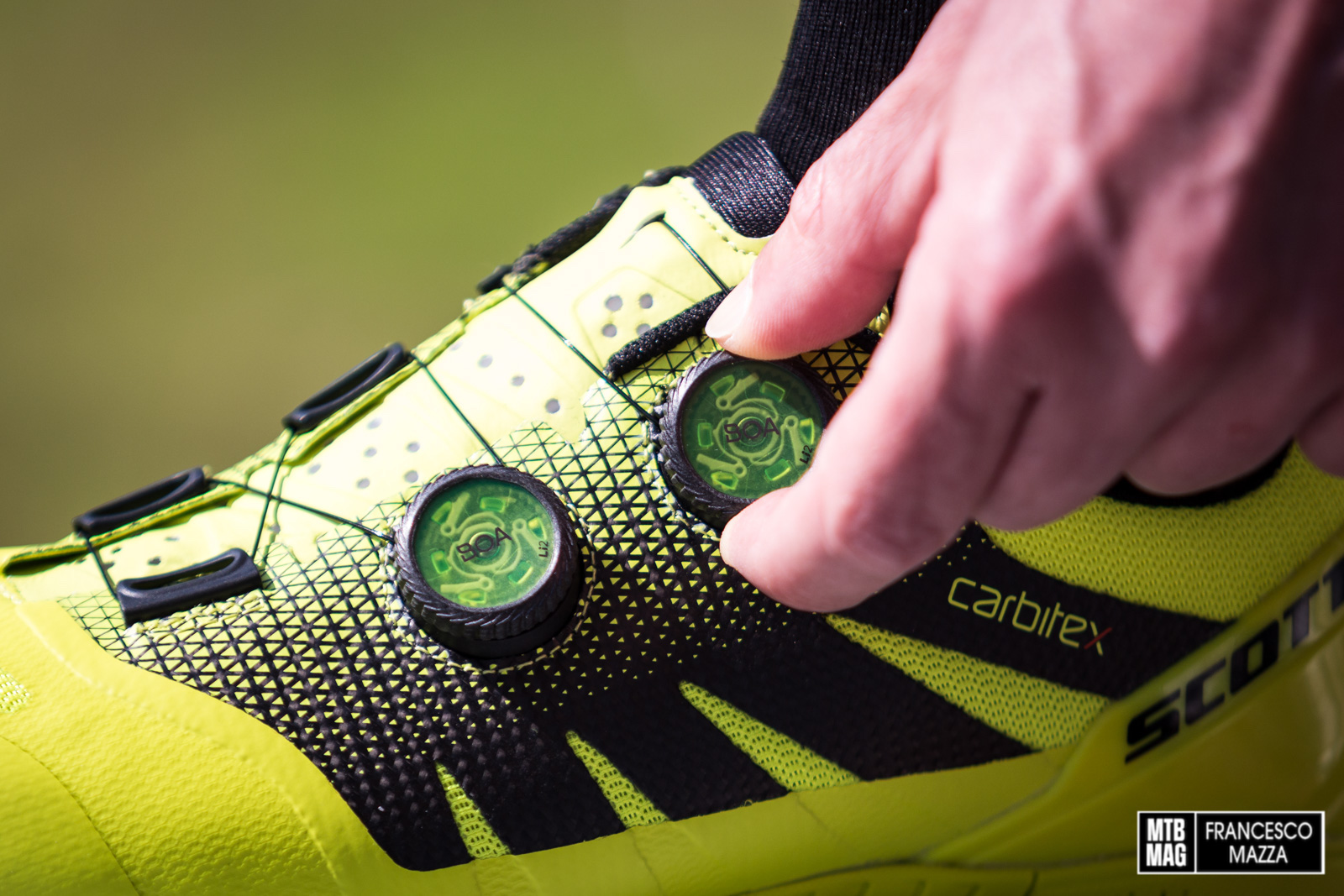 The new BOA Fit System Li2 is adopted by several brands such as Scott, Fizik, Gaerne and many others, so it is possible to find this new system on a fair amount of shoe models. For more information on which products are currently equipped with the Li2 system, visit the website BOA Fit System.

PREV the future of Milan’s cycle path: risk of forcing – Mobility
NEXT this is how he fills the front page of the newspaper with his book – Libero Quotidiano

ATM withdrawals: how we will change habits

PS5 behind Switch, but Returnal is in the Top 3 of the Spanish ranking at the end of April – Nerd4.life