Napoli-Lazio 4-0, report cards / Koulibaly is impossible to climb, Spalletti is the antidote to mediocrity

Ten to Mertens: a tribute to divinity. Napoli defuses even the Orsato loose cannon. How unhappy are the Lazio people who also sing “Pulcinella son of a bitch” 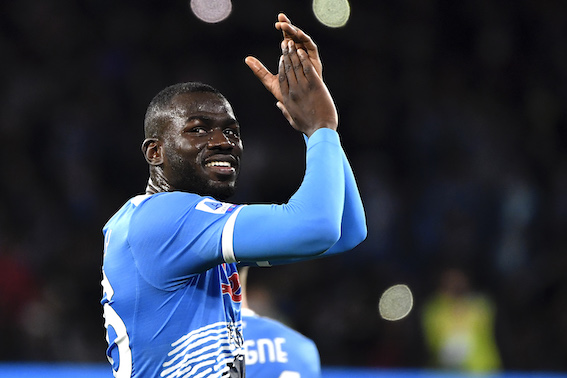 The report cards of Napoli-Lazio 4-0 by Fabrizio d’Esposito and Ilaria Puglia.

OSPINA. Tonight, Ilaria, Diego’s spirit anticipates that of Christmas and the rain is a blessing embrace between the sky and the green lawn of the Maradona. Even Ospinik benefits from it, who in the 25th minute makes a great save on that shot by Luis Alberto. Then the comfort of Santa Traversa on the Acerbi cabeza – 7

Premise, Fabrizio: I was there. And together with that famous Napoli-Lazio 4-3 of 2011 this match will remain in my very personal annals as one of the most beautiful I’ve ever witnessed live. Returning to our Ospinik: he was under my curve when he said no to Luis Alberto, I was able to appreciate his very full reactivity. And he was still under my curve when Mertens scored his second goal: Ospina turned towards us to cheer and I swear to you: even his gloves smiled with happiness. I loved him deeply – 7

DI LORENZO. The workaholic Euroappuntato is in two images but with a single meaning: he loses two balls and then immediately recovers them in a ferocious way – 6.5

True: he fought fiercely to make up for mistakes. And Pedro, from there, had no hope of passing – 7

Rahman. Napule returns not to concede a goal and Amir does his part in an evening in which the Commander is a living wall that no one can overcome – 6.5

There in the middle, yesterday, the Commander stood very high, but Amir also definitely did his – 6.5

KOULIBALY. Higher than Kappa two there is only Everest: in any case, Koulibaly is impossible to climb tonight and adds another chapter to his academic manual for defenders. Watch and learn – 8

An impassable wall, in front of which Immobile looked like a chick. Attentive, precise, wonderful. Pure exaltation – 9

MARIO RUI. Marittiello Maravilla, which continues to amaze. Always present in the overwhelming dribble of Napule, in the 57th minute he performs with a right-footed shot, which is not his foot, and the comrade Reina rejects. Exemplary instead in the 28 ‘: one of his shots is returned, Lazio restart and the Lusitano returns to defense to recover the ball – 7.5

At a certain point, when cornering, voices began to rise: “but who is that, Mario Rui ???”. Someone could not believe it, he thought of an optical joke, someone else of a misting due to the rain. Because I swear to you, Fabrizio, the one seen last night on the pitch didn’t look like him! – 7.5

GHULAM from 86 ‘. Without vote

Without a vote, however, it is always nice to remember that it exists – sv

LOBOTKA. Incredible, Ilaria, the metamorphosis of the ugly Slovak duckling: tonight he plays Jorginho’s double. It looks like a casino dealer distributing the chips on the table. Lobotka always finds a way to start the futbol bailado that humiliates the Illusionist who cheated Lotito, only good at taking tactical notes – 8

Wonderful: absolute master of the midfield. It centered, sorted, uprooted, directed. He too we struggled to recognize him. I thank him for transfiguring himself in this way on the day I decided to return to the stadium – 8

FABIAN RUIZ. Aware of their talent, L’Aquila swings confidently and decisively over Napule’s second and third goals. Replaced by Lobo in front of the defense, he is free to open and invent. Of course, sometimes he falls into the usual support errors, even making a mistake with some out-of-time shots that, when countered, trigger the Lazio counterattack, but the fourth goal sweeps everything away. And so only the light remains – 7.5

He enters almost all the actions of Napoli, the decisive ones, I mean. With Lobotka it was gold in the eye, wonderful – 8

MALCUIT from 86 ‘. Without vote

LOZANO. El Tav is on the right path and is a spring always ready to splash down there on the right. He tries a lot, without forgetting the assist for the second pearl by Ciro our – 6.5

The title could be: Lozano’s solitude. He was always only on the right, unmarked, yet in the first half he was served very little. In the second he went better, but he did not show the same verve as his teammates, in my opinion – 6.5

And it also does it with order – 6

ZIELINSKI. Reborn. I can finally call him San Piotr again. The curd (with the left) of the one to zero is from Zeta. For seventy minutes and passes it never stops, dynamic and powerful, and militarily occupying large spaces – 7.5

He pierced Reina without proof of appeal, towering over Sarri’s men, annihilating them. Most importantly, it never shorted out, managing to keep the bulb on and gleaming. How wonderful when Piotr is like this – 8

DEMME from 73 ‘. Time for a yellow card – without a rating

BADGE. The triumph of the ephemeral, apart from the assist for the two to zero. He doesn’t outrun the man and never gets a shot. But tonight is a party and negative votes are not allowed – 6

Insigne’s problem is only one: the childish caprice. Because yesterday he participated once again in the action in a very concrete way, bringing the ball in front, catching up behind and opening the defense of Lazio whenever it was possible to do so, but there are two problems: the first is that when he foolishly stubborns about scoring a his goal suddenly becomes small (so much so that he apologizes to the audience for trying yet another shot around while in the center there was Petagna who should only have thrown it in), the second that even in recovering the ball in the defensive phase is like if he always wanted to have the last word (sometimes hindering his teammates) – 6.5

MERTENS. Ciro is mobile, not a statue, and returns to the ancient with two film library nets, in addition to propitiating the advantage of San Piotr. The first goal is scored after having skipped two opponents, the second achieves it by immediately pulling from the right corner of the Lazio area. He rejoices, laughs and makes moves. Then, since he is not lacking in intelligence, he also says: “Without Osimhen perhaps we will play the ball more”. Tonight is a Mertens flaunting his initials: DM. The vow can only be a tribute to the divinity who became immortal a year ago (I abstain for the sake of my country from judging the statue and everything else) – 10

Extraordinary. He gave us the perfect match, he too seemed transfigured. He scored at 10 ‘, on the day Maradona remembered Diego. It made the cold less intense, the rain less beating, the hail as light as snow, the masks less invasive, the sky less leaden. It had been years since we saw a Dries like that, Fabrizio. Completely lowered in the game, in front of Sarri, then, the one who created him as a center forward. The grade you gave him is the only one possible, so I make it mine. But the numbers, compared to what he gave us yesterday, no longer count for anything. From 10 to infinity, perfect – 10

PETAGNA from 64 ‘. The result of the match is such that his teammates mostly ignore him, going in search of personal glory – without a vote

Not all comrades: Insigne – sv

SPALLETTI. Napule is still standing: they beat Lazio, do not concede a goal and are first on their own. The magician Luciano makes a virtue of necessity and without Victor Victoria the blues become dribbling and pushing at a continuous pace, without wasting and without giving in to aesthetic complacency. This team is flexible thanks to him and is always up there. Spalletti uses the right verb: enjoy it. Enjoy everything, even the defeat sarrita – 9

He is right when he says that it was an indelible match, that he makes jurisprudence on many things. And he is right when he speaks of the joy of the players on the pitch, of the fact that they no longer wanted to go out, that they wanted to continue scoring over and over and over. Yesterday’s Lazio was zero, but the wonderful thing is that Napoli didn’t wait to measure the opponent and then decide if they could attack him or not, they devoured him from the first to the last moment. If any other team had been there yesterday it might have been the same. Yesterday’s game was pure joy, interpenetration, a kick to mediocrity. The celebration of Spallettipensiero: our goal is not to live in mediocrity. A sentence that should be printed on the walls of the city – 10

REFEREE BEAR. It could have been a loose cannon and uncontrollable. Fortunately, Napule immediately killed the game – 6

Fabrizio, allow me to take advantage of our report cards to applaud the Lazio fans who, despite their team losing and even badly, sang for 90 very long minutes because they had very important concepts to externalize, to reiterate. The first: “We are not Neapolitans”. And in fact Piotr made him understand immediately: no, you are definitely not like us, you are not Neapolitans. The second: “Colera Napoli”, and there Mertens had to intervene to make him understand the severity of the disease. The third: “Vesuvius wash them with fire”, and again Mertens made the lava flow that so much advocated falling on him. And finally, the third, the best choir, the highest, which I personally had never heard yet, and for which they deserve a mention: “Pulcinella son of a bitch”. There, Fabian Ruiz had to think about it. That choir was too funny, it was right to celebrate it. In the meantime, at Maradona, we laughed madly and waved goodbye to him with our little hand with 4 well exposed fingers. The vote is at the Maradona, also in terms of comfort of the curve, I must say – 10

PREV EU, David Sassoli hospitalized since December 26: commitments canceled – TGCOM
NEXT The return of Mary Poppins, the most beautiful phrases of the film

The Earth’s core is cooling in no time: the alarm raised by scientists

Maryland, man found dead at home: he lived with 124 snakes

The five most important dossiers for Italy in 2022