Thank you for following the live broadcast of SPEZIA-BOLOGNA 0-1 with us, see you in the next round of Serie A TIM.17:01

The episode that decides the match in favor of Bologna is the penalty in the 81st minute: Arnautovic’s free kick with Nzola’s hand deflection. Arnautovic himself goes from the spot and scores and gives the three points to Mihajlovic’s team. Bologna hit three posts, two in the first half and the third with Barrow in the 62nd minute on an assist from Arnautovic. Spezia held up to the penalty and failed to be dangerous in front of goal.17:01

End of the match of SPEZIA-BOLOGNA 0-1. Mihajlovic’s team wins the three points.16:58

SPICE OPPORTUNITY! Salva Ferrer crosses from the right for Erlic’s header that goes out. Last hope for Spezia to equalize.16:58

Bologna closing in attack, Mihajlovic’s team seems to be in control of the last minutes of the match.16:56

La Spezia tries to respond with Ferrer on the right who crosses hitting first Hickey who deflects the ball towards Skorupski who blocks.16:51

GOAL! Spezia 0-1 BOLOGNA. Goal from a penalty by Marko Arnautović. Perfect conclusion from the 11 meters of the Bologna attacker who goes flat right, with power, Provedel guesses the corner, but does not get there. Advantage for Mihajlovic’s team.

WARNINGS Nzola! The striker of La Spezia is sanctioned with yellow for the hand ball.16:46

PENALTY BOLOGNA! On the free kick beaten by Arnautovic there is Nzola in the barrier who raises his arm and deflects the ball out. No doubt for Massimi who points to the disk. 16:45

Mihajlovic introduces fresh forces above all to strengthen the attacking maneuver, given the tight spaces Vignato can make the ball turn with quality.16:43

It is a return from Agudelo, given that the Spezia player was out for a long time due to injury. Thiago Motta believes in it and tries to win the game with these new moves.16:43

SPICE OPPORTUNITY! Kovalenko receives the ball at the edge of the area to serve Salcedo inside on the right, the striker tries the shot earlier, but Skorupski is careful and saves blocking the ball.16:36

WARNED Salcedo! Foul by the player of Spezia who entered too hard on an opponent.16:47

OPPORTUNITY BOLOGNA! Svanberg collects a ball rejected by the defense and from outside the area the square with the right inside with the concusion coming out of a whisker!16:31

Spezia reacts with Nzola entering the area managing to shoot, but also here an excellent job by the Bologna defense.16:29

Bologna again: Hickey’s dangerous cross from the left with Provedel coming out and blocking the ball. The Spezia goalkeeper urges his team to do better.16:28

OPPORTUNITY BOLOGNA! Arnautovic gets free in the area, serves Barrow who makes a round shot with the right, but the ball ends up on the outside post.16:26

SPICE OPPORTUNITY! Nzola-Amian exchange on the edge of the area with the latter going to the conclusion of a left inside that engages Skorupski on his right, the rossoblù goalkeeper rejects for a corner.16:22

Bravo Orsolini to free himself on the right and go to the shot at the near post where Provedel deflects for a corner with his foot.16:19

Arnautovic enters the back line on the left, but then his cross is closed in the area by a La Spezia defender.16:18

Spezia try to get out of their own half, but Thiago Motta’s team struggles because Bologna keeps their center of gravity high, putting pressure on the Bianconeri.16:15

Bologna immediately with Orsolini, wide on the right, who crosses with his left-handed, but the defense of Spezia calmly rejects the high pitch.16:11

The second half of SPEZIA-BOLOGNA 0-0 begins. First ball touched by the guests.16:08

Mihajlovic can be satisfied with his team because Bologna have come close to scoring and are playing the game, perhaps the rossoblù coach wants the pace of his team to rise further so as not to suffer the pressure and the restarts of Spezia.15:55

Thiago Motta will have to motivate his team to do better because Spezia suffered so much in the last minutes of the first half. Several dangers for Bologna have come from the left with the raids of Reca and Strelec, but both Antiste and Nzola are struggling to free themselves because the Bologna defense is careful.15:55

Mihajlovic’s Bologna has come close to scoring more than once. First at 10 ‘with Arnautovic who controls well in the area and then shoots hitting the outside post. At the end of the first half it is Barrow who hits the post with an assist from Soriano. However, Spezia maneuvered well, but the offensive restarts created few dangers for the rossoblùs.15:53

The first half of SPEZIA-BOLOGNA ends 0-0. Equal to goalless at the Peak.15:51

OPPORTUNITY BOLOGNA! This time Arnautovic enters the area, again from the right, a few steps away he pulls hard with his left, but a providential recovery by Erlic sends the ball for a corner.15:50

OPPORTUNITY BOLOGNA! Soriano is served in the area on the right and with the same foot puts on the near post for Barrow who hits the post and then Provedel finds himself in the ball.15:49

Barrow controls the edge of the area, the Bologna striker, with his back to the goal, serves behind Orsolini who goes to the conclusion with the left-handed, but shoots high.15:45

WARNINGS Go! Do it hard from behind on an opponent.15:43

Spezia immediately responds with Strelec who takes a double step on Soumaoro, then shoots, but the weak conclusion ends up in Skorupski’s hands.15:42

OPPORTUNITY BOLOGNA! On a corner kick, Soumaoro comes from behind and heads off without fail, but the ball goes out.15:40

Always Orsolini from the left turns and focuses towards the area to go to the shot, but the defense of Spezia once again careful to reject the conclusion that ends first on a player of Bologna.15:39

Look for the cross from the left Orsolini for the insertion of Svanberg who finds the exit with the punches of Provedel who moves away. 15:34

Spezia is still dangerous with the incursion of Reca who crosses left-handed for Antiste, first anticipated by Theate and then Skorupski pushes away with his fists. Then Amian tries the conclusion, but ends up outside.15:31

Study phase after several actions on both sides. Both teams play for the win.15:29

Spezia wastes an excellent opportunity with Reca who goes away to Soumaoro on the left, enters the area and puts the cross, too long for everyone, but a conclusion that worries even Skorupski at the exit.15:25

OPPORTUNITY BOLOGNA! Mihajlovic’s team responds immediately with the conclusion of Barrow from outside the area with Provedel saving.15:23

SPICE OPPORTUNITY! Strelec penetrates to the left, then serves on the other side Antiste who adjusts the ball for the conclusion, but his shot ends out, well controlled by Skorupski.15:22

Mihajlovic’s team is growing and forces Spezia to squash in their own half.15:19

Another Bologna initiative, with Dominguez trying to make Barrow run deep, but he is good at getting out of his own area and anticipating all Provedel.15:17

OPPORTUNITY BOLOGNA! Throw forward for Arnautovic who frees himself in the area on the left, bounces the ball then concludes with his left, but the ball ends up on the outside post.15:20

Protests by Spezia for an alleged foul on Nzola in the penalty area. Reca widened well on the left and then crossed to the forward Juventus. Everything is regular for the referee and for the VAR.15:13

Corner Spezia: cross in the center for Amian who had a lot of space and tries the header that ends out.15:10

La Spezia maneuvers to the right with Antiste sprinting forward, then crosses in the center for Nzola, with the deflection of the Bologna defense that puts in a corner kick.15:09

Set-up work by Bologna who keep possession of the ball, but Spezia is high in pressure.15:07

The first half of SPEZIA-BOLOGNA begins. Referee Luca Massimi of the AIA section of Termoli directs the challenge.15:05

At the peak of La Spezia it began to hail, so the referee, with the assistants, monitor the situation in view of the kick-off.14:58

Mihajlovic confirms the same formation seen against Venice: the Soriano-Barrow duo behind Arnautovic. Orsolini holder on the left.14:55

Thiago Motta has to do without Gyasi suspended. Space ahead of Strelec, who with Antiste and Nzola will form the attacking trio of Spezia.15:04

Both teams are looking for redemption after the last defeat on the last day: Spezia fell in Bergamo against Atalanta, while Bologna lost in Venice.14:23

Everything is ready at the Peak for the Spezia-Bologna match, valid for the 14th matchday of Serie A TIM.14:22

Where the game is played: 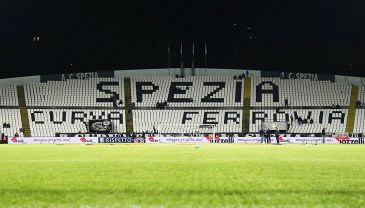 NEXT Betty White, the ‘Golden girl’ actress of American TV, was about to turn 100

WeWard, the application that gives you money if you walk a lot. A few euros in exchange for data and thousands of km

the sensations of Charles Leclerc and Carlos Sainz