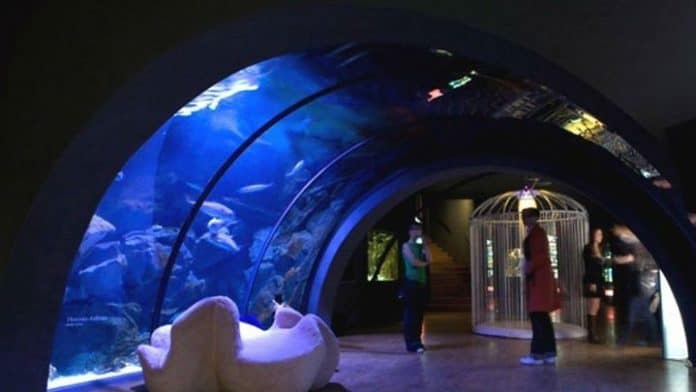 On the occasion of the great exhibition MONET at the Royal Palace,
from 6 October the Civic Aquarium of Milan hosts an unmissable installation entirely dedicated to the world of nature and to the most emblematic subject of Claude Monet’s masterpieces: the Water Lilies.

From 6 October 2021, the spaces of the Civic Aquarium of Milan will host an unmissable installation entitled The Aquarium and the Water Lilies. From Nature to Monet’s art entirely dedicated to the world of nature and to the most emblematic subject of Claude Monet’s masterpieces: the Water Lilies.
The initiative promoted by the Civic Aquarium of Milan, the Natural History Museum of Milan and the Municipality of Milan_Culture, produced and organized by Arthemisia, is curated by Nicoletta Ancona, Mami Azuma, Gabriele Galasso and Elisabetta Polezzo.

A collateral event to the Monet exhibition. From the Musèe Marmottan Monet in Paris – in progress at Palazzo Reale in Milan until January 30, 2022 – which introduces the visitor into a dreamlike space, light and with soft colors just like those of water lilies, Monet’s favorite plant which, right in his residence in Giverny, he created a pond where they could be housed together with other flowers and aquatic plants.

All within an ideal setting such as the Civic Aquarium of Milan, whose external facades of the early 1900s in Art Nouveau style feature large ceramic tile coverings that reproduce themes and subjects from the aquatic world: fish, floral motifs, plants. aquatic but above all water lilies.
Asian lotus flower (Nelumbo nucifera), Small yellow water lily (Nuphar pumila), White water lily (Nymphaea alba), Blue lotus flower or blue water lily, that is the blue lotus of the ancient Egyptians (Nymphaea nouchali), Ninfea zolfina (Nymphaea × thiona): plants that bloom from June to September but animate the outside of the Aquarium all year round, reproduced on the large coverings (0.90 × 3.15 m) that decorate the external walls produced by the Richard Ceramic Company Ginori.

THE EXHIBITION – THE NINFEA IN HISTORY, ART AND SYMBOLOGY

Admired and object of various symbologies, the water lily – with its diffusion in all continents and its large flowers – has always fascinated and continues to fascinate numerous artists. Its unchanged forms, in fact, have crossed different cultures over the centuries and with their charm they continue to stimulate imagination and admiration.
We find traces of this splendid aquatic flower already in the artistic production of Ancient Egypt which knew its cultivation well.
The water lily, white and blue, appears in many frescoes, bas-reliefs and Egyptian plastic art and its silhouette also lends itself to the use of precious everyday objects, such as glasses.
In Greek-Roman antiquity the flower is hardly remembered even if there are hints of it in particular in Pliny the Elder’s Naturalis Historia.
Even in medieval herbaria, the water lily is not particularly mentioned while it is very popular in non-Western cultures, such as the Maya civilization. Among these populations the iconographic theme of the Water Lily Jaguar is very frequent, which perhaps partly owes this strange association to the fact that it is a feline that lives on the banks of waterways and thus belongs to both the terrestrial and the aquatic world, exactly like the water lily that sinks its roots in the earth while the corolla is placed on the surface of the water.
The water lily theme is also very common in Japan, in the world of ukiyo – eo image of the floating world, a genre of Japanese art print on paper imprinted on wooden blocks.
Towards the mid-nineteenth century Europe knows this kind of art and falls deeply in love with it, giving rise to what is called Japonism.
The themes dear to the great Japanese artists are studied and reproduced by the most famous painters of the time such as Van Gogh, Monet, Manet, Degas and many others.
Monet in particular was fascinated by the idea of ​​the Japanese garden which he decided to recreate in his Norman home in Giverny, creating a pond in which to grow various exotic plants but above all water lilies that he obsessively reproduced in the last decades of his life.

Alongside the importance that this flower has had in the history of art, it is also necessary to remember its symbolic meaning. The water lily develops, in fact, in water and only the rhizomes and roots are immersed in the muddy earth of the ponds bottoms. A beauty that comes from mud, without being stained by it but drawing strength from it, represents purity that is not contaminated by the evil of the world. A purity that can be read as a symbol of chastity and unrequited love and perhaps also, ultimately, of coldness.

On the occasion of the exhibition “The Aquarium and the Water Lilies” from 9 October 2021 to 30 January 2022, the entrance fees will be as follows:

Tickets can be purchased on https://museicivicimilano.vivaticket.it/ or on site on the opening days of the Aquarium based on the available capacity.

He dies of gas fumes, 37 years old found by his girlfriend

Sanremo, former winner is moved by the serious death