For now, they say from Welfare, until 9 May the agendas are almost full. From the “Bertolaso ​​plan”, the over 60s should have been vaccinated starting from that date, but “if there are open slots – they assure -, they will be available sooner”. In particular, “from 3 May new vaccine lines could open”.

To get an idea of ​​the Lombard run-up, since yesterday anyone can access the new portal on the Region’s website which contains all the numbers of the anti-Covid campaign. The daily pace rose again, reaching 68,638 on Wednesday. Lombardy has so far administered 2.6 million vaccines, 80.5% of deliveries. 71.57% of the immunized received Pfizer, 21.75% Vaxzevria (AstraZeneca), 6.68% Modern. And soon the fourth arrived will be added: Johnson & Johnson, of which the first 30,550 doses expected from last Friday arrived in Niguarda yesterday. Going to the categories: the last two undergoing vaccination (over 70 and over 65) travel at a rate of over 32,000 doses per day, the former (for a total of 320,280 already vaccinated), over 10,000 the latter (46,238 in total). 122,000 are extremely fragile and their caregivers vaccinated so far.

The most “covered” province, with the highest percentage of citizens already vaccinated with the first dose, is Cremona, with 24.23%; Milan is at 19.62%. Looking at the regional map, the darker shades at the municipal level stand out. The city with the highest dose coverage ever is Viggiù, in the province of Varese, with 69.48%. And it is no coincidence: Viggiù is among the four municipalities placed in the red zone on February 17, in a Region then completely in yellow, due to the emergence of contagion clusters linked to the English variant of Covid. Here the first mass vaccination (aimed at all over 60s) started when still in Lombardy only health workers and over 80s were vaccinated. Similarly, the famous “health cordon” of municipalities on the border between the provinces of Brescia is highlighted. and Bergamo, in addition to Soncino, affected in February by a sharp increase in infections and where the same extraordinary vaccination campaign started. 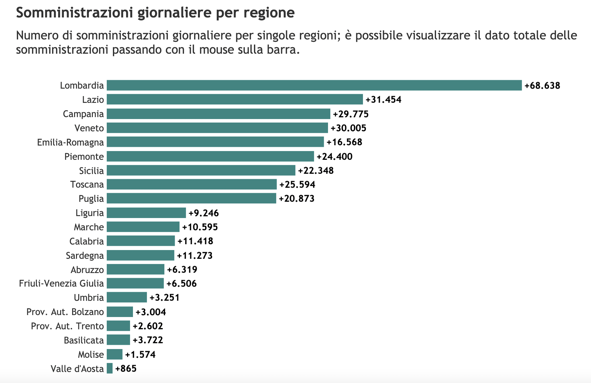 Announcing the goal of 68,000 administrations per day, the president of Lombardy Attilio Fontana stressed: «Now we find ourselves slowing down due to the shortage of vaccines. We need to implement the supply, so we can also reach 100,000 a day ». Sunday kicks off the new hub at the Palazzo delle Scintille, in Citylife, organized to administer approximately 10 thousand inoculations per day, from 8 to 20 weekends inclusive, through 72 vaccination lines. It is about «the largest area set up in Italy together with that of the Brescia Fair“. On Sunday the first 2,000 vaccinations, mainly dedicated to extremely vulnerable patients.

PREV Rosalie boycots André’s research! Here because…
NEXT May 1st 2015 and Expo, Milan devastated by the fury of black blocks – Chronicle

Serie B, Cittadella with one foot in the play off final: Monza knocked out 3-0

nude mod undresses Chris Redfield and endows him with a bursting erection – Nerd4.life