The further deterioration of the weather conditions is putting our city to the test. The streets of Catania have turned into rivers in flood, with sacks of rubbish swept away by the “current”, flooded houses and businesses, broken down cars and collapses. At 12 this morning there were already 214 interventions carried out by the firefighters with 429 teams handled since the beginning of the bad weather emergency. Another 186 interventions in the queue, but the number is destined to rise. Dozens of reports also received from the editorial staff of Cataniatoday.

“The ceiling of my home collapsed – says a desperate reader – and since yesterday I am alone in the house with my children, waiting for someone to come and inspect the site”. Another lady explains to us that she was stuck in Gravina, in a parking lot, because it is impossible to continue uphill along Via Gramsci. In via Galermo, thanks also to the slope, the garbage bags are rolling downstream, covering who knows how many kilometers with the push of the rains.

Even in the courtrooms of via Crispi the problem of infiltration from the ceiling has returned to the fore: the first floor seems to be even flooded and buckets have been placed in the halls to prevent the same from happening in the corridors. Same situation at the Porte di Catania shopping center. In the airport area there are road closures due to flooding, which also involved the Santa Maria Goretti village in the past few hours. The damage to the power lines led to the suspension of the water service in the area of ​​Aci Sant’Antonio, as communicated by Acoset. Meanwhile, in Scordia, the search for the missing woman continues. Her husband was found lifeless yesterday.

A car parked on the roadway was crushed by the fall of a tall tree in via Liguria. 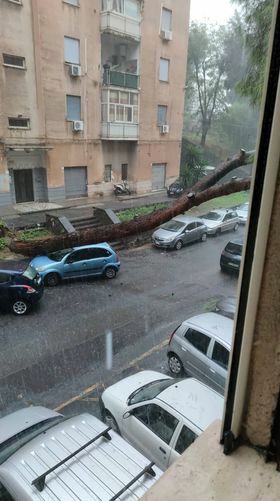 The meteorological scenario is worsening and the arrival of the now famous “Mediterranean cyclone” is feared. “More and more confirmations are arriving on the formation of a deep Mediterranean cyclone in the coming days, which could take on tropical characteristics becoming what is medically called Medicane (from MEDiterranean HurriCANE)”. To say the meteorologist of 3bmeteo.com Edoardo Ferrara. Unfortunately – he continues – the bad alluvial weather of recent days in Sicily could be just an appetizer of a new and even more severe wave of bad weather that could hit the island between Thursday and Friday, when the cyclone would seem to make landfall once strengthened near Malta.

Due to the intense rainfall, the Tangenziale Ovest of Catania is temporarily closed to traffic, towards Messina, at km 3,200. This was announced by Anas, stating that the motorway site is flooded at Gravina di Catania. In the direction of Syracuse, traffic has slowed down considerably. Anas staff and maintenance teams are hard at work to restore circulation as quickly as possible.

PREV Competition at the Municipality of Rome, when will the hiring be? The M5s presses Gualtieri
NEXT MediaWorld flyer “To each his own technology” December 9-24: gifts in time for Christmas

Champions, round of 16 draw: Juve’s nightmare is PSG. Inter are risking Bayern or a big English team

Guido Rasi: “The recall increases antibodies and should not be postponed, the other doses are on the way”

Evergrande does not pay and Fitch downgrades it to “restricted default” By Investing.com

Here is the date of the increase: when the new pension arrives