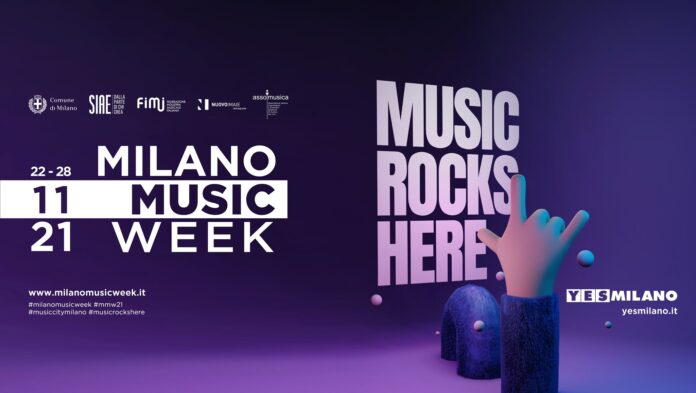 The week dedicated to music and its people returns from 22 to 28 November
protagonists with a wide program of appointments in presence and in
streaming.

At the center of the fifth edition, live music and the world of live clubs which, after months
of stop, he is finally trying to restart and find his audience again.
The new “home” of the Milan Music Week will in fact be the popular Apollo music club
Milan where for the whole week there will be numerous appointments of
in-depth study of the central themes of the music industry.
Vasco Rossi will officially inaugurate MMW21 with an exclusive streaming interview.

Sara Vasco Rossi to officially inaugurate the 2021 edition of the
Milan Music Week with an exclusive keynote on the Milan Music Week streaming channel on the occasion of the publication, on November 12th, of the new album “Siamo qui”.

After the success of an all-online edition, the “week of music” returns from 22 to 28
November with the most important names on the Italian scene. The main players in the supply chain,
with an extensive program of face-to-face and online appointments, they look to the future together
of the music industry involving professionals and enthusiasts.
Promoted and strongly supported by the Municipality of Milan – Department of Culture, SIAE
(Italian Society of Authors and Publishers), FIMI (Federation of the Italian Music Industry),
NUOVOIMAIE (New Mutual Institute for Artists Performers), ASSOMUSICA
(Association of Italian organizers and producers of live musical performances) Milano Music Week is confirmed as a consolidated and awaited event, after the success of the 2020 online edition which saw 149 appointments between panels, webinars, workshops, meetings, concerts and DJ sets , over 50,000 hours viewed and more than 500,000 live views, 198 artists, more than 300 professionals involved.

Live music and the world of live clubs will be at the center of the fifth edition – entitled Music Rocks Here – to once again bring attention back to one of the sectors most affected by the pandemic crisis which, after months of stoppage and continuous political debates , he is finally trying to restart and find his audience again.

“The events of the Milan Music Week will be hosted above all by clubs that program music all year round, provide a stage for artists, produce art and culture, and in the last two years have suffered, first forced to close and then to the constant uncertainty about reopening .

The online use of the events will certainly be an important part of the program, also presenting exclusive contents. But the destinations we have chosen to favor will be the music clubs.
We want it to be the first Milan Music Week of a new era for music in the city ”.

New dates announced to complete the Vasco Live 2022 tour. Find out the details! For info and tickets click here