In recent days we have written about the arrival of the Orion capsule inside the large building called VAB (Vehicle Assembly Building) which is located at Kennedy Space Center in Florida. This is the last step before seeing a NASA SLS rocket fully assembled. This step was taken in the past few hours when the capsule was lifted and then inserted over the adapter (where some CubeSat satellites are located).

The lifting operation lasted a few hours and now further checks and tests will be carried out before we can actually see this large carrier launch. There mission will be theArtemis I that it will have no human crew on board but will carry a dummy to test the on-board systems. There NASA has not yet officially stated when the launch will be made, but it could be between the end of the year (unlikely) and the beginning of next year (more likely).

Completed the first NASA SLS rocket that will fly to the Moon, with a mannequin

As reported by the space agency in the past few hours, the team called Exploration Ground Systems has managed to successfully lift the capsula Orion dedicated to the mission Artemis I. The teams attached the capsule to one of the five overhead cranes inside the VAB. They then lifted it to the top of the rocket (which is around 100 meters high). Operations began when it was six in the morning in Italy. 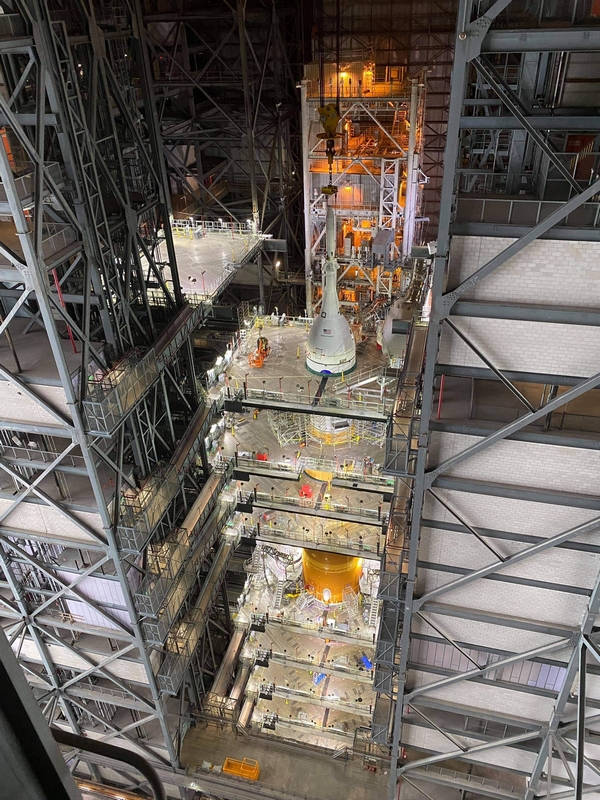 Click on the image to enlarge to the maximum resolution

. Now the challenge to launch the big rocket is not yet complete. In fact it will be necessary to make sure that all systems communicate correctly.

Then there will be a need to transport the rocket thanks to the mobile launcher (where it is currently fixed). At that point there will still be some tests to run before the actual launch. Failures are not contemplated as they would greatly delay subsequent missions. As much as this project has been (and is) criticized due to cost and time, it will probably be the first rocket certified for human flight and capable of returning it to the natural satellite, to fly in decades.

PREV The broken dreams of Roberto, who died of work at the age of 22 in Isili: football and the folk group are his usual passions
NEXT Gimbe’s alarm: “The effectiveness of vaccines is decreasing. The first signs are coming. We need to speed up the booster”

“Squeezed in the airports of Lazio”

Covid, the Omicron variant scares the world. “In 7-10 days we will know if it is diabolical, we wait for the data. It affects the speed with which it would be replacing Delta”