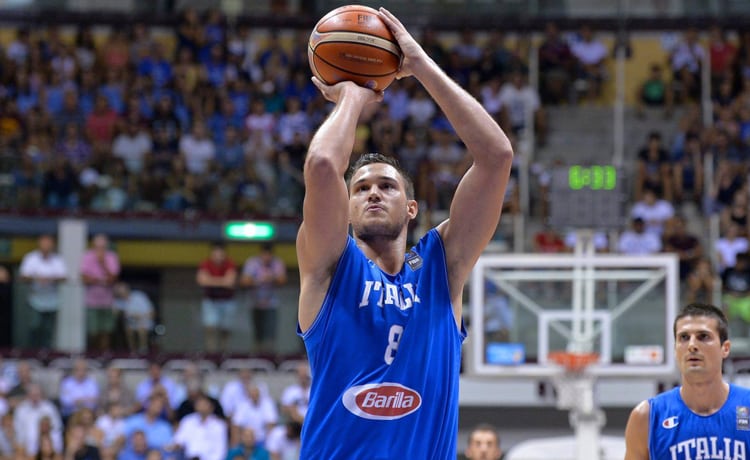 Germany and Italy descend on the parquet of the Saitama Super Arena on the occasion of the match valid for the basketball tournament at the Tokyo 2020 Olympics. After 17 years of waiting, Italbasket returns to breathe the Olympic atmosphere: then Carlo Recalcati sat on the bench and on the pitch they flew Basile, Pozzecco and Galanda. The Belgrade pre-Olympic gave the Azzurri the ticket for a dream: a dream that begins with an extra Danilo Gallinari. On the other hand, the Germans, most likely the last force in a group including Nigeria and Australia: the Teutonics will also not be able to count on Dennis Schroder’s performances. At 6:40 am on Sunday 25 July will start the challenge that you can follow in real time on Sportface.

BASKETBALL: THE PROGRAM OF ALL COMPETITIONS

38 ‘- Tonut recovers the ball with the collaboration of Pajola, Melli puts the exclamation point on the counterattack. 82-88.

37 ‘- What a triplaaaaaaa! Tonut scores from a decentralized position, in precarious balance! 82-86. Now we are in charge.

36′ – OVERTAKE ITALY! Circulation of the wonderful sphere and yet another triple from Fontecchio, now at 20 points. 82-83.

36 ‘- Bonga continues to be Germany’s extra weapon, as does Wagner: determining physicality. 82-80.

35 ‘- Gallinari’s twitch, who however fails to deposit the ball to the basket. Fortunately ineffective counterattack by the Germans.

31 ‘- Germany without Schroder, but equally cohesive and performing. Bonga shuffles the cards again and hits 2 using his physical structure. 74-68.

30 ‘- Tonut does not forgive in penetration, what a quality in the final touch! 72-68. Italy is there, the Azzurri believe in it.

29 ‘- Unsportsmanlike against Tonut, but the referees want to double-check the monitor. The blue tried to get in the way between Bonga, who was thrown to the basket, and the ball.

26 ‘- Offensive rebound of the Germans, who are not wrong from 2. Defensive naivety of ours, not exactly determined on that ball. 61-56.

26 ‘- Melli unleashed, this time with 2, finisher near the Teutonic basket after a recovered ball. 59-56.

25 ‘- It starts from Melli, who scores from 2. Italy is slightly slow in proposing maneuvers, too many non-fluid offensives. 59-51.

24 ‘- Ball lost in setting by the Germans, but the blues are unable to strike up a counterattack action.

24 ‘- The triples suddenly follow one another, still lethal Obst. Ours cannot limit it. 57-48.

07.34 – A few moments before the restart of the dispute, athletes ready for the third quarter.

14 ′ – Germany-Italy question and answer, Gallinari again scores with an invention from 2. 36-27.

END OF THE FIRST FOURTH

10 ‘- Thiemann does his duty near the basket, but Vitali responds with a triple in precarious balance! 29-22.

8 ‘- Gallinari invents an excellent trajectory in fade away. 27-16.

8 ′ – 2/2 of Wagner from the line, irrepressible Teutonic at this juncture and also skilled in defense. 25-14.

7 ‘- A simply sensational performance from 3 from Germany, which does not give our players a breather. 23-14.

3 ‘- Germany tries the offensive forcing, but Fontecchio scores again from 3. 5-9.

1 ‘- Fontecchio manages to hurt with a triple from the corner and repeats on the counterattack. 0-5.

06.34 – Azzurri on the field with the Mannion-Tonut-Fontecchio-Polonara-Melli quintet.

06.31 – Warm-up almost completed for the basketball players, the blues are preparing for the contest.

06.29 – Almost everything ready, a few moments and then it will be Germany-Italy.

06.25 – Great expectations to see the Azzurri at work, after the last-minute qualification against Serbia, favored on that occasion. Gallinari and his companions will try to make the most of their possibilities.

06.20 – Hello and welcome to the direct text of Germany-Italy, the blue return to the Olympics after Athens 2004.

PREV Tax reform, the revision of the land registry reappears: this is what it provides – 24+ – Il Sole 24 ORE
NEXT LIVE COVID-19 – The Lazio bulletin. F1, Raikkonen positive. The vaccine situation in Italy: overtaking France and Germany. Victims alert in the USA

Italy demolishes Canada and flies to the quarter-finals – OA Sport

This is what the elections in Germany suggest to Italy

The Fdp hawks were decisive, Italy worried. And in Brussels it will be euro-paralysis